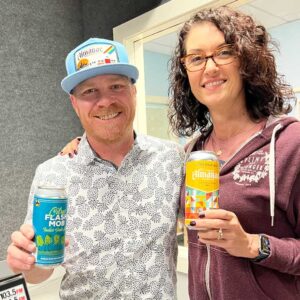 The brewery is located on the old Alameda Naval Air Station. Admiral Malting is their next-door neighbor. Their facility was built in 1938 entirely out of redwood.

Their name comes from the Farmer’s Almanac, which has been published since 1888. It was known as a history of weather patterns, for farmers. They want the brewery to represent agriculture and the local farmers who produce what goes into the beer, which also ties into their menu. Their motto is, “Beer is agriculture.” The brewery was founded in 2011 to apply farm-to-table principles with beer. They have been in their current facility for the last four years.

Kolsch is one of their core beers, the fastest growing beer in their lineup. It is 5% ABV and he calls it their “Sunday lawn mowing beer.” It’s a kind of cross between an ale and a lager. They have picnic tables inside and a large outdoor area and food trucks, and free parking. The outdoor space has been a life-saver for them during Covid.

Pliny the Younger has a positive economic impact in Sonoma County due to the tourist traffic that it generates. Today Natalie describes some 2022 statistics that show increases that were reported in the Press-Democrat. The 6.1 million dollar impact is a 20% increase over last year. It includes spending on hotels, restaurants, etc. “It means a lot to us,” says Natalie.

Kevin describes his journey into beer, which actually started in music. He worked for an guitar and accessory maker, the Ernie Ball company. As a home brewer, he knew he would enjoy working in the brewing business. He started in a distribution company and there, he got to know the two co-founders of Almanac Brewing. About a year ago he began working for them.

They are tasting an Adambier, which is a German style, not very well known. It is a strong, dark lager originally from Dortmund. It is 6.7% ABV with a hint of tartness.