Mark begins by tasting a German beer, then later they will taste beer from Louisville, Kentucky, which Herlinda was able to procure.

Tara Nurin lives outside of Philadelphia and Steve remembers being in Philly for the Democratic convention in July of 2016. Tara says that the beer culture in Philly is in the top 5 in the country. Herlinda points out that Philly Beer Week was the first beer week in a city, even before San Francisco.

In addition, Tara has been covering beer and spirits for Forbes for two years and she was their first on that beat. She gets to travel a lot and just came back from Germany. She visited the oldest brewery in the world, they have been there for almost 1000 years. They just did a collaboration with Sierra Nevada, which (apart from Anchor in San Francisco) is the oldest post-prohibition modern craft brewery. They will be making a collaboration beer, a Californian hoppy style with the old German style.

Steve asks Mark about the German beer, a German IPA. He describes it as pale and bitter but not as bitter as most California IPAs. It’s a craft brewer, BRLO, from Berlin. 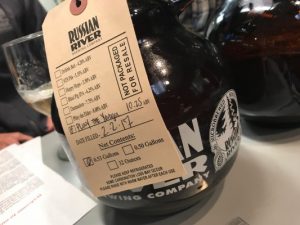 Furthermore, Mark notes that there is a trend toward higher alcohol beers in the American style, and around the world they are making these American styles. Mark tells how Americans used to go to England and Germany to learn brewing and now they are learning from us.

Pliny the Younger is still available. They had the first taste again this year on Brew Ha Ha. Steve remembers this year as his favorite, with some citrus flavor. Mark says a lot of modern hops have that citrus flavor.

Tara is here to talk about Sonoma County surviving the fires and how the county is definitely open for business. Herlinda invited Tara out to report on the nuances and details of the damage and recovery. The whole tourist infrastructure is intact. Steve points out that only one winery was severely damaged (Paradise Ridge). Tara sees a lot for people to come out and visit.

After the break and a toast to Steve’s newborn grandnephew, Tara talks about the Guinness Storehouse. Their 200th anniversary was last year. She describes the 8-story brick tower in Dublin on the Guinness grounds which is now a modern interactive attraction with a restaurant and brewing experiments. Mark remembers one he saw in London and also in Dublin.

Tara and Herlinda will be attending the gala for San Francisco beer week including a talk with the brewmaster for Bear Republic. They will also visit St. Florian and interview them. They have been on the show too. She will interview and tour Seismic Brewery in Santa Rosa. Then, they will go to Napa to interview Peter Mondavi Jr. for their 75th anniversary.

Mark also gives a shout out to Wilibees, the Santa Rosa retailer with a great beer selection.