Tony Magee, the founder of Lagunitas Brewing Company visited Brew Ha Ha back on Nov. 14, 2014 for on-air interview with Steve Jaxon. Steve is in the studio with Joe Tucker, who was his co-host on the show at the time. Steve began by asking Tony Magee to tell the story of how he got started in the brewing business. Tony Magee began, “It was Christmas 1992 and my little brother got me a home brewing kit for a Christmas present, and I brewed it in January, drank it in February. It was a California Common Beer, an Anchor Steam sort of variety, drank it in February and was immediately smitten. I had never even considered brewing before that.” 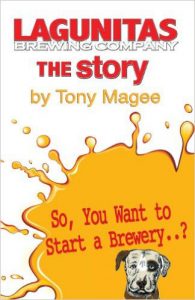 Steve asked Tony Magee if he had been a beer drinker before that. “Only at Marin Brewing Company. That was my singular connection to beer. Out there in the world I would pick up Red Tail Ales at the liquor store, they were essential to everything. So I brewed that batch in February and I said that’s it, I’m in, and by December I had the brewery open. …a week later I went and got another batch from Great Fermentations that used to be there in San Rafael, and brewed it, but it wasn’t even done fermenting before I just wanted to try another batch. And so the next thing you know I had five batches going and all of a sudden you’re bottling and you’ve got more beer than you know what to do with in the house and you start trying to give it away. And so I did and after a little bit, people were liking it and so I thought, well how do I go about selling this? And what I was doing before this was a little bit less than satisfying, so I wanted to get away from it.”

Knowing that the story went a long way farther after that point, Steve asked how that step from home to Lagunitas was made. “Well, it was the kitchen, … and then I burned up a stove, and moved out to the deck, then I thought I’d get a license to do it out here on the deck, and I’ll sell these kegs one five gallon keg at a time. I filled out all the paperwork for the ABC to get a license, and only then talked to the County and the County said, “Uh, we’re never going to let you have a commercial brewery in your house. Are you kidding me?” And so I quickly, I didn’t want to redo all the paperwork, and all the paperwork said “Lagunitas” on it and so I was like, all right, I’m keeping the name, cuz I like the name…”

I describe it in the book as being chased down the street by a pack of wild dogs. You don’t slow down or look behind you because if you stop, they catch you.” Steve noted, “…the book is available everywhere, it’s unbelievable, you must check it out, it’s the whole story of Lagunitas, written by the founder, Tony Magee.

Tony Magee continued with the Lagunitas story. “We began bottling in 1995 which was kind of the beginning of the bubble for Craft, that lasted about 5 or 6 years into 2001, before really, there were too many breweries. There were too many breweries making poor beer. There were too many breweries trying to grow too fast. There was too much easy money in the industry. Just like the dot com bubble, the same thing happened to Craft. And so that’s what we were born into. Because that’s what we were born into, we had to become very good students of what beer lovers wanted to drink. Because what they had in front of them apparently wasn’t what they wanted. So we had to find new flavors, and we did.”

Joe Tucker asked, “You just mentioned the flavors that are important to the brewery. There’s a pretty neat story about where those flavors came from. You guys were the first to identify ‘dank’ as a target profile flavor.” Tony agreed. “Well, we knew about ‘dank.’ We were there for Dank before Dank was Dank. We were believers… The way our beers were formulated was very different, but I can’t even say I invented that. We didn’t discover it. The truth of the matter is that came from Grant Johnston, who was the head brewer at Marin Brewery at the time. He’s back now brewing back in Chicago now. I’ve seen him there a bunch of times.”

He had this crazy IPA that he made for an anniversary beer at Marin Brewing that was, all the hops went in late, he barely added any at the beginning. He kind of just did it on a hoot, and he hated the way it tasted… So he moved off of it. But I was like, OMG I could see a whole ’nother way to construct beer recipes. And now that’s very conventional, where the first couple of additions are very very light.”

Steve asked, “So that became the famous Lagunitas IPA in some form?” and Tony replied, “Yeah, pretty much. …that beer was brewed the way it tastes right now and the struggle over the years hasn’t been to improve it, it’s been to try and keep it exactly the way it was. I don’t want to create a romantic story from the past or anything, but the first day we tasted that, you could hear angels singing, there were bells ringing. It’s like running your finger around the top of a wine glass, all of a sudden it sings. You can just taste that.”