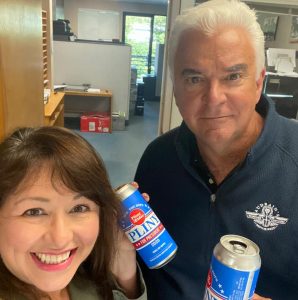 Black is Beautiful is the cooperative fund raising recipe from Marcus Baskerville of Weathered Soul Brewing in Austin, Texas. Natalie Cilurzo calls in to talk to Steve Jaxon and Herlinda Heras today on Brew Ha Ha. Black is Beautiful now has over 1000 participants and they will taste and describe Russian River Brewing Co.‘s version of it today.

Natalie describes how the city of Santa Rosa has closed five blocks of 4th Street downtown, from now until October 15, so that restaurants, including the Russian River Brewing Co. downtown Santa Rosa location, can provide additional outdoor seating with social distancing. There is a little parklet in front of their place. Bayside Church donated their time and materials to build parklets for the restaurants that wanted them. Natalie really appreciates that effort.

In Windsor, Russian River Brewing Co. is closed for dining and open for beer and food take-out. They do have tables and chairs out in front so people can bring their take-out outside and have it there, but the beer garden is closed for the time being.

Their third batch of Pliny for President 2020 has been released. Herlinda gave some to John O’Hurley, the famous actor who played Peterman on Seinfeld, there in the studio. 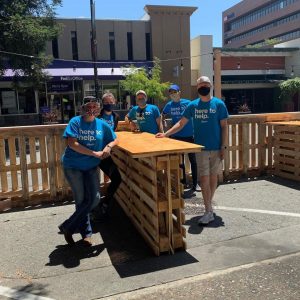 As they taste the Black is Beautiful ale, Natalie describes it as thick and rich, an Imperial Stout that is “definitely not for the faint of heart.” Russian River Brewing Co. has also released their edition of the Black is Beautiful project. That’s the recipe that Marcus Baskerville of Weathered Soul Brewing has launched. Marcus was on Brew Ha Ha a few weeks ago, on June 11, to describe it. He invites brewers to use the beer to raise money for their choice of local causes. Russian River Brewing Co. has chosen to support Legal Aid of Sonoma County and The California Innocence Project.

Pliny runs for President every four years on the Keg Party ticket, this is his fourth campaign. They thought it would be a beer they could use to celebrate reopening, but since reopening is postponed, it’s for shelter in place now and they are releasing it in cans now. California customers can order it or get it at the breweries. It is a double dry hop. It has a bright, fruity citrussy beer. She gets grapefruit and citronella. It’s based on Pliny the Elder but “even better.”

Gabe Jackson from the Beverage People was going to come in but is busy. Herlinda will be curing olives this Fall, with help from The Beverage People. Herlinda says Gabe wanted the audience to know that they are available to give you advice about what you will be doing with their equipment. Visit the Beverage People dot com.  Of course we’re going into apple and wine season and they have equipment for cider and winemaking. You can order anything you need and pick it up at the store or have it delivered.