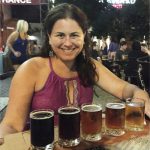 On this episode of the Brew Ha Ha podcast, Tara Nurin calls in from Minneapolis, Minnesota, to report on the Craft Brewers Conference and Brew Expo America. She writes about the business of beverage and spirits for Forbes magazine. She has recently published a book, A Woman’s Place Is In The Brewhouse, which Herlinda reports has surpassed 10,000 sales on that big website that people buy stuff from, and she is also thee most frequent guest ever to appear on Brew Ha Ha.

Tara Nurin tells the story starting with the great relief everyone felt, to be around friends and colleagues again. Natalie Cilurzo was the keynote speaker and people are coming away with a good feeling about it all. Herlinda mentions that Bart Watson, economist for the Brewer’s Association, has published some data that looks good even after the pandemic. Tara tells of people who opened breweries in 2019 and 2020 who tell about surviving and growing their businesses. There were a lot of pessimistic predictions but in the end more breweries made it than they thought would, at first.

Tara is also working with NZ Hops, which means New Zealand-grown hops. Meagan Andersen was on last year on this episode, to talk about NZ Hops. Among the many types of hops they sell, they have one called Nectaron® that was developed after a 17-year R&D process. There was a poll of brewers who voted this the most popular hops that they would like to get. There are some proud and happy 5th generation farmers in New Zealand now. NZ Hops is also selling a new hop oil product that is very easy to ship and is also “super-sustainable.” Instead of shipping a box of pellets, they ship a box of vials, which is much easier.