Keita Tominaga from the renowned Japanese restaurant Hana, in Rhonert Park is our guest on Brew Ha Ha today. Steve Jaxon is in the studio for the interview, as are Harry Duke and Herlinda Heras.

Keita is the oldest son of Ken Tominaga, who founded Hana. He has been cooking since he was 19 and has been the executive chef at Hana for over a year. His father passed away last May and everyone mourns his loss and misses him very much. Ken Tominaga opened Hana before Keita was born. Originally the place was very small, and was based on traditional Japanese menu. Gradually it became so well known that it is considered perhaps the best Japanese restaurant in northern California.

Hana has a Sake bar, which is a newer part of the restaurant. Long after opening, when they remodeled about 8 or 9 years ago, they added the space for the Sake bar. His father started importing Sake from Japanese producers directly. Keita explains that Sake is based on rice, grown, harvested and fermented a certain way. It is an intricate tradition that takes a lot of culture and practice. There are varieties of types and flavors, like beer and wine. Herlinda explains that Sake is erroneously thought of as rice wine. It is really much closer to the process of brewing beer. 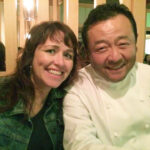 Keita has brought Japanese rice balls, which he explains is the Japanese children’s equivalent of PB&J to American kids. You form triangular rice balls with your hand, add any kind of filling, and wrap in seaweed. The restaurant is looking for staff so if anyone is interested, they are willing to train in their traditions.

Hana’s Sake list is immense. Sake can also be seasonal. There are some fresh-squeezed and non-pasteurized Sake can come in the Spring, called Nigori and Nama. The variety also comes with the variety of food items. Some are sweet and savory and go with bigger full-bodied sake. A lighter kind of Sake could go with something like Sushi or white fish. There are all kinds of Sake and they have all kinds of names too.

Keita suggests that if Sake is too cold, you can miss some of the flavors. He also likes it hot. At one time Hot Sake had a reputation of being cheap, in the USA. In Japan, warming up the Sake is a sign of hospitality to guests. They have different hot Sakes on the menu in the winter. A bowl of Japanese type soup or a hot pot of Udon noodles would go with that.

Right now Hana is open Tuesday and Thursday 4:30-9 and Friday and Saturday 4-9.