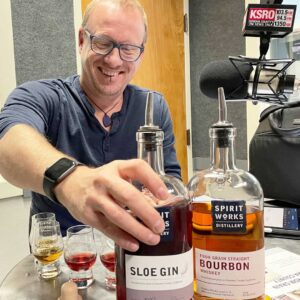 Timo Marshall from Spirit Works Distillery joins Harry Duke on Brew Ha Ha today in the KSRO studios. Spirit Works Distillery is coming into its tenth year. Based in the Barlow, they are a small family run operation, “grain to glass.” They have a Spirit Club too. They are perhaps best known for their Sloe Gin and their Bourbon has won several awards recently, including a “Best Of” from the North Bay Bohemian.  In 2020 they won Distillery of the Year, which was “hugely flattering” but there was no celebration due to the pandemic. The award focusses on how the distillery operates and their general philosophy as well as quality of product. They received by a Zoom conference. For him and his wife Ashby, the head distiller, they felt like it was a real career milestone.

Timo was born in Britian and became interested in spirits early on. His grandmother taught him how to make sloe gin. He was fascinated by having to forage for Sloe berries and by learning the local traditions. He is proud to be making Sloe gin in the old traditional way. The Sloe berry grows on the blackthorn bush that was planted as a hedgerow in England for centuries because it’s thorny and protects the fields. In the late Autumn it produced very tart sour berries. Slider is Cider with Sloe berries. The British nation owes a debt to whoever first put Sloe berries into gin.

Their Sloe Gin is far less sugary than the English one. They wanted to create one that is “…very fruit forward, with sour tart plummy flavors, a cranberry, citrussy flavor, very special.” In the UK some people drink it neat after dinner, and in the US it is a cocktail ingredient, anywhere its flavor is desired, such as in a Manhattan. People can add a dash to some sparkling wine to make a kind of Sloe Royale. It’s also nice with ice.

The tasting room open Wednesday through Sunday in the Barlow in Sebastopol. Their tasting room staff is friendly and a visit is an educational experience. There is a window into the production space, for all to see. The still is a large copper structure that is beautiful to see. Part of making Sloe Gin is making regular gin, which in turn requires pure spirits so they do it all. Timo calls it a “grain to glass” facility. They bring in whole grain, wheat from the Sacramento area, which they mill and mash then distill.

They also make a Bourbon whiskey, called Four-Grain Straight Bourbon Whiskey. It is a true California made Bourbon. That has to be at least 51% corn, then wheat and rye and topped off with some malted barley. Then it is stored in American oak barrels. American White Oak is what gives the vanillas and butterscotch flavors to American whiskey. They use 53-gallon barrels, a normal standard size.

Herlinda Heras calls in from Italy, where it is 2:20 AM, and she is there to be a judge in the Italian national beer competition called Birra dell’Anno (“Beer of the Year”). Herlinda was in Italy two years ago just before the pandemic. She is visiting friends here and there, then she will go to Rimini, on the coast near Bologna, for the beer convention. She will be back soon with beers to share.