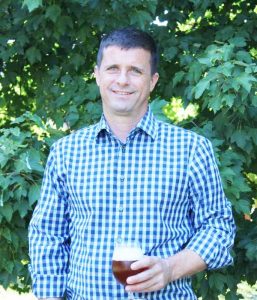 Neil Witte started as a home brewer and got his first brewery job in 1997 in Kansas City, then for another larger brewer in the same city. He worked for three years as a brewer then as a quality control manager visiting bars and restaurants making sure the beer was top quality. He took beer certification programs and did a lot of private study. Now he works for the Cicerone Certification Program as the chief trainer.

Etymology, Definitions and Pronunciation of Cicerone

Cicerone means “guide” in Italian. (1) It commonly refers to an Italian tour guide. “Cicerone” is Italian for the Latin name Cicero. Marcus Tullius Cicero was a great scholar, lawyer and writer of the first century BCE. His surname is still synonymous with eloquence in the Italian language. In Italian, the term Cicerone is first noted in the mid-1500s to mean a local guide capable of narrating a tour, for a fee, through the numerous monuments, museums and historic scenery of Italy. 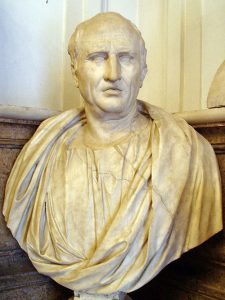 Marcus Tullius Cicero (106-43 BC) aka Cicerone in Italian.

The word “cicerone” has been well established in the English language since the early 1700s, with the same meaning it has in Italian. In both languages, ever since it first appeared, it is just as easily invoked ironically or derisively, in reference to the overly florid or affected language of the worst of them. By extension, in Italian and also in English, cicerone is a common word for an expert guide to anything.

As for its pronunciation, it depends on the language. In Italian it is “chee-chair-ÓH-neh” (using English phonetic lettering to render Italian sounds) with the accent on the third of four syllables. English has adopted the word with its own sound, so in British or American pronunciation, people say “SIS-er-own” in three syllables. In any flavor of English either one is correct.

Herlinda describes how they are doing classes online in order to keep busy during confinement. They have several free introductory classes and tastings. This is a great way for people who like beer or work with beer to add to their knowledge.

Their highest degree, the Master cicerone, is a two-day exam, with written and oral questions as well as tastings. He majored in Philosophy and found that the Master exam was the hardest he ever had. They also have a YouTube channel.

(1) Here is the definition of “Cicerone” in the online Treccani dictionary of the Italian language. http://www.treccani.it/vocabolario/cicerone/

(This episode was originally recorded on 5-14-20 and placed in the podcast queue for the 4-23-20 edition due to lack of new shows owing to Coronavirus inconveniences. We apologize for the interruption of the time-space continuum. Cheers.)