Anne Marie Roberts of Teeling Whiskey in Dublin, Ireland is our guest today on Brew Ha Ha with Steve Jaxon and Mark Carpenter. She is the California Brand Ambassador, based in Oakland. Herlinda Heras is also in the studio today.

Teeling Whiskey is the first new distillery to open in Dublin, Ireland, in 125 years. They opened about 5 years ago and the founders come from a very old whiskey-making family. “We represent a new generation of distillers, focussed on innovation and cask maturation and leading with flavor,” she explains.

Their casks are made of at least seven types of wood and this is what gives most of the flavor to the whiskey, and over 100 cask types. Today they will taste four whiskeys from Teeling: 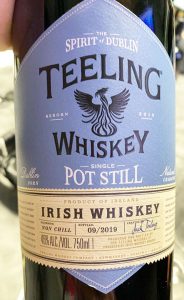 Mark Carpenter started the distillery at Anchor in 1973, it was the only pot still in America. All the big distillers use continuous stills, where you feed your mash in the bottom and the whiskey comes out the top. Pot stills are done in batches. The Irish distillers are the only ones who use the single pot still technique.

The single grain in a corn whiskey but spends its 5 years of maturation in Cabernet barrels from Napa Valley.

Irish whiskey must be three years plus one day old (one day older than the Scotch requirement). Also, Scotch and American whiskeys are required to be aged only in oak, while Irish whiskey calls for “wood like oak,” so they have more freedom.

Tara Nurin calls in from Seattle, Washington, where she is continuing her research travels for her book about women in the brewing business. Today’s date is March 12, which is just as the Covid-19 crisis is starting to appear so she may cut the trip short. She describes the copper tanks at the New Albion brewery there, which are like the ones at Anchor in San Francisco.

Teeling Whiskey is a fairly young company and they are building their brand and their distribution. They have won more then 200 awards around the world for their whiskey in the last five years.

They were the first Irish whiskey to win the single-malt category at the World Whiskey Awards, for their 24-year. The single malt they are tasting today spends 9 to 23 years in different wine casks. There are many types of wine casks used, all of which lend flavor to the whiskey. “It’s a beautiful whiskey,” says Mark Carpenter. Anne Marie describes the flavors in each one.

Teeling Whiskey’s prices range from about $28 to $60, but there are some single casks and 34 or 35 year-old whiskeys which may sell in the thousands. The 24-year-old was the first Irish whiskey to win the worldwide single-malt award.