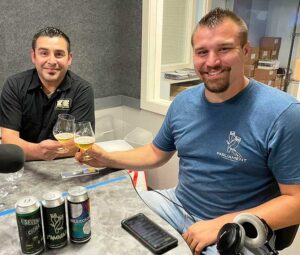 Juncture Taproom owner Peter Lopez and Adam Bosch of Parliament Brewing in Rhonert Park join Harry Duke in studio on Brew Ha Ha today. Peter Lopez reports that they are still alive! His gratitude goes to the neighborhood regulars and his staff. Half of his original staff is still with him. Junture Taproom and Lounge is located at the corner of Mission and Montgomery in Santa Rosa. They have 3500 square feet inside and a huge patio that overlooks Santa Rosa Creek. They have a large projection screen with surround sound. It’s a great place to watch a game. The menu is simple but tasty. They have 20 beers in rotation on tap, including several popular ones from Parliament Brewing.

Parliament Brewing in Rhonert Park is a family operation. Adam Bosch runs the tasting room and does sales and distribution, his father Alan mainly does the books and his brother Justin brews the beer. There are always new projects with a new business. He found that they had to start distributing beer in cans, which is growing. They also provide more beers in kegs for bars and restaurants. Their tasting room in Rhonert Park is located just south of the Costco. They have outdoor seating and plans to build more, to be able to hold up to 200 people. They have food trucks, including Tacos San Juan, Buns Only, Camacho, War Pigs, Lila’s Streetside Eats. Tuesdays is Trivia Night with Tacos San Juan and the other food trucks are in rotation, so not on the same day of the week.

Juncture Taproom’s rotation usually has 2 taps each for cider, sours, barrel aged beers, old-world pilsners and lagers, and seasonals. In the winter they may have more Stouts and Porters and in the summer time, more Hefeweizens and Pilsners or Lagers.

They taste Kaleidoscope, a hazy IPA that is Parliament Brewing’s flagship brew. Peter says it’s so good that they keep it on tap at Juncture Taproom Adam’s brother Justin discovered brewing science in college and invited him to to California to work with him. He is happy with the career choice. Kaleidoscope, at 6.9% AVB, it will not overwhelm you to have more than one. They made the recipe together, Adam chose the ingredients and Justin is in charge of the process. The name Parliament refers to a group noun sometimes used for owls and also for a community of people who collaborate. Kaleidoscope is considered to refer to butterflies (see the can art).

The second beer is a west coast IPA called Smosaic, which is a portmanteau of the names of the two kinds of hops used to make it, which are Simcoe and Mosaic. The AVB is 7.2%, it is more clean, piney, citrusy, the standard west coast IPA. It is balanced and the bitterness is not too strong.

The third beer is called “Seven and Citra” made with Idaho 7 hops and Citra hops. It is more bitter, well-hopped, and at 7.8% Adam calls it the bigger brother of Kaleidescope.

There are a lot of local stores in Sonoma County where they are available in cans and on draft in some. They also make a smoothie style kettle sour, with fruit added, they have Pilsners, as well as Stouts and others.