It’s a busy show today, as Meagan Anderson and Tara Nurin both join Herlinda Heras, who is back from a three-week trip to Estonia and Finland. Tara Nurin writes about the business of beverages and spirits for Forbes magazine, from her home base in Camden, New Jersey. Meagan Anderson is the representative of New Zealand hops growers. Here is her Twitter page. Herlinda was in Finland judging the national beer competition and the national Sahti competition. She was the first American judge in either competition. Sahti is the Finnish national home brew. 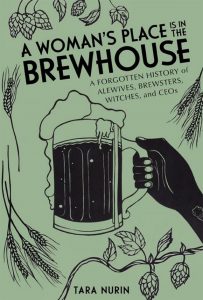 New Zealand hops have a special reputation among beer fans. Her organization is a cooperative of twenty-seven growers. They have been growing hops in this reagion of New Zealand for 150 years. They grow some of the best hops in the world, such as Nelson Sauvin and Riwaka. Meagan is here to promote a new one, called Nectaron. Some of their hops have trademarked and registered names. See them all here at the NZ Hops website. Some have exotic names derived from other languages such as Moutere (which seems derived from French where it would be “moo-TER”). They say “MOO-ter-ee.” One is called Mouteka. Nectaron is named for Dr. Ron Bitzen, a botanist who worked on hops his entire career and who created Nectaron out of 12 years of R&D. Nelson Sauvin was created from their breeding program and released in 2000. It’s a very distinctive hop.  They have limited supply, 1800 acres, and they are under 1% of the world supply, but they have special qualities.

Meagan Anderson’s first job in the beer market was at Samual Adams, as a beer salesperson and trainer, for ten years. She moved to Idaho to work for a hop company called Mill 95. There, she met some New Zealanders. She found a company in Kalamazoo, Michigan that makes a hop oil. Then she met Totally Natural Solutions, that produces a totally natural hop oil. Her dream job materialized with the New Zealand hop growers offered her a job. In New Zealand there are some 5th and 6th generations of children growing hops in the fields of their family farms. In 2010 she started a home brew club and one of the members was Jack McAuliffe, the founder of New Albion. It was the first new brewery founded here after Prohibition. They made the first American pale ale.