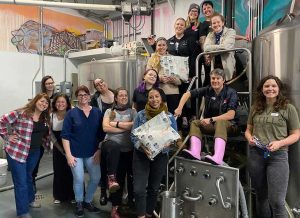 Tara Nurin is back on Brew Ha Ha with Steve Jaxon today, along with Herlinda Heras, to talk about her latest article in Forbes magazine and her upcoming book about women in craft brewing. Mark Carpenter is traveling this week. Tara Nurin writes about all aspects of the brewing and spirits business for Forbes magazine. You can follow Tara on Twitter here.

Tara’s latest article in Forbes is “The #MeToo Movement Is Coming To Craft Beer… Will It Arrive Before All The Women Leave?”

The #MeToo Movement and the Craft Brewing Industry

Describing her current Forbes article, Tara says that many women she has interviewed who have suffered sexual harassment in the brewing business say that they could leave the industry if things don’t change. She goes on to tell how the reputation of the craft brewing industry has been about how people are nice and support each other, and while that is true, there is another side to the story that is only being told now. Thanks to the #MeToo movement and to her research and reporting, the rest of story is beginning to be told. In particular, she tells the story of Natalie Phillips, who worked for a brewery in Columbus, Ohio where she was allegedly raped. “Everyone knew but nobody talked about it,” until she went to the press a year ago and has now talked to Tara about the story. Since this story came out, many other women have also complained about the same person, yet the detective investigating the case has not interviewed the others.

Tara’s visit to California includes a distillery tour organized by Hotaling & Co. distillers. They were spun off from Anchor Brewing after Mark Carpenter started their distilling branch, which was eventually separated from the brewing company after a series of ownership changes. She will have a tour of Anchor Brewing and they will also visit with Judy Ashworth, the pioneering Bay Area publican (who was featured here on Brew Ha Ha last December.) Finally they are going to visit Hopland Tap, which Ron Lindenbush has reopened on the site of the old Mendocino Brewing Co., for a taste of the new Red Tail Ale with Don Barkley. Tara lived in San Francisco in 1997 and remembers liking Red Tail Ale. There was also a beer called Red Nectar.

Tara also belongs to a group called Barley’s Angels, a women’s home brewing club. This rolls in nicely with our sponsor The Beverage People, who since 1980 have been helping folks with home brewing, winemaking, and any and all other kinds of fermented foods, like yogurt, olives, mead, and much more.