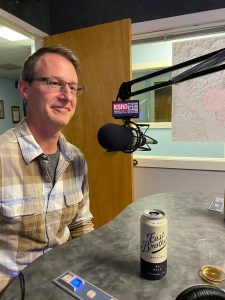 East Brother Brewing Co. is named after an island in San Francisco Bay called East Brother Island, near their home city of Richmond, California. They are located in the old shipyards where they built 747 ships during WWII.

Rob Lightner and his friend Chris Coomber founded the brewery three years ago. They are also neighbors in Richmond. The brewery has a tap room in Richmond, near where the old Pixar offices were. They have food trucks that come to the tap room. For entertainment and competition they have darts, bocce and ping-pong. Rob is glad that people come there to play and talk with each other, not to stare at their own phones the whole time.

Their beer styles are simple, with five core beers: a Bohemian Pilsner, a Lager, the Oatmeal Stout, and two IPAs. They also do a few others in rotation. They are distributed in kegs and cans all around the Bay Area.