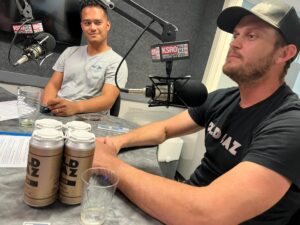 Harry Duke and Herlinda Heras have two themes on Brew Ha Ha today. Paul Matlock and Dan Ferris from the 20/30 Club of Santa Rosa will talk about the Battle of the Brews and Tom Edwards, brewmaster from Old Caz Beer, is in the studio. Battle of the Brews takes place April 9, 2022 at the Sonoma County Fairgrounds. Dan is chairing the event this year. Battle of the Brews has been off for two years, but it has a twenty-five year history. They started back in the 1990s when gas was less than $2 a gallon. There are all kinds of breweries there, and people can taste them and vote for the people’s choice award. Voodoo Vultures and Rotten Tomatoes, two local bands, play live. There are 50 breweries and 12 BBQ teams also in competition. Once you come in, it’s all you can enjoy, one price for everything. It’s $110 this year, all included, even the bands. On the day of the event, there are nationally ranked judges who come in, including Herlinda Heras. Herlinda Heras actually ran the vaccine clinic in the same building. It’s a nice big space.

Tom Edwards tells the story of Old Caz and how he became a brewmaster. He got into brewing through his uncle 10 years ago. He was home brewing with friends and Tom tasted a sample and it was “legitimately good and blew my mind.” After that, he wanted to dive in and learn all he could. He got into home brewing, went to the Beverage People and “went farther and farther down the rabbit hole.”

Many home brewers wonder if it is possible to make a go at it and become a business. He realized he needed to know about commercial brewing and operations. So you either need a brewing degree or work experience, to emerge with the knowledge and practice. He didn’t want to go back to school and he sent 100 applications. He worked briefly for Budweiser and learned about how the high volume productions work. But he was also accepted by Bear Republic and that is where learned as they expanded. He started in 2012 and was happy to to unglorious work to learn the craft. Speaking of scrubbing tanks, “it was magical, it was awesome.” He made it up to brewer. Now his company has bought equipment from Bear. He started his own brewery with a partner in 2018 and has been on a “total grind” since then. They have a Hazy IPA called Free Craigs which celebrates getting free stuff off Craigslist. They got multiple cold boxes, their grain mill, at least $300,000 worth of free stuff that works!
He brought the beers that they will be pouring at Battle of the Brews. The beer is their Midas Blonde.

The 20/30 Club provides school supplies to young children in need and Old Caz is one of the breweries that is contributing to it. They also taste the Lavender Radler which has a great story from a friend who made lavender lemonade and they managed to make it blend with a beer. Harry Duke declares that it is one of the most unique flavors he has ever tasted. It tastes more of lemon and sour than lavender, which some people might associate with soap. “It’s fascinating. I did not expect that,” says Harry. It’s only 4.4% ABV, so very light.