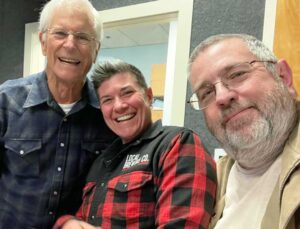 Regan Long of Local Brewing Company of San Francisco joins Harry Duke and Mark Carpenter today on Brew Ha Ha. They are celebrating their 7th anniversary in June. They are a 10-barrel brewery, they do about 20 kegs per batch. Since Covid they are packaging a lot of beer in cans too.
Regan Long studied Physics and Astronomy and had an interesting career as a scientist in Oceanography and Engineering and tells the story of becoming a brewer. Mark Carpenter adds that a science background is ideal for going into brewing. Regan Long also taught Oceanography at San Francisco State, and did some scientific and business consulting across a wide variety of industries.
They are known for a lot of their lager beers. Their Black Lager was their first award winning beer. They called it Bluxome Black from the street where they are located. They have won a handful of awards for this one.

Mark Carpenter is opening a Pilsner now. The first one they tasted is Vacation which is flavored with a particular strain of yeast that has a bit of pineapple notes. It is a 100% Pilsner malt. It is a flagship for them, and a unique beer. It is “bright and snappy, and nice in warm weather.” It is a yeast strain that a lot of brewers don’t want to work with because it takes 21 days at a relatively high temperature.

They are also making a new beer that they are making for the Giants’ stadium (Oracle Park) where they have a concession, at Gotham Club. They are only distributed locally, in the Bay Area. It was their choice to “slow roll that model…” as they develop the brand in their chosen home market.

During the Covid pandemic they did a lot of canning, including using different artists for their can labels. They do not have one standard look except for all having an innovative and modern vibe with Californian iconography. Their Pilsner that uses the Australian hops is a classic Pils that Mark Carpenter says has wonderful flavor. It is a Bohemian Pilsner malt with an Australian hop that plays different in a low-alcohol pilsner malt. Mark says that the lower alcohol, 4.0 percent, which means you can drink more of it.