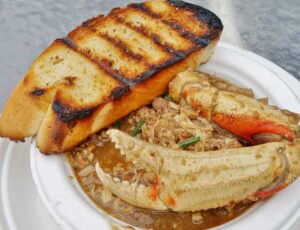 Faron’s New Orleans Style BBQ chef Faron Bailey and his friend and collaborator Sandro Tamburin from Old Possum Brewing are our guests on Brew Ha Ha with Harry Duke and Herlinda Heras today. The Old Possum Instagram page has the most up-to-the-minute news about menus and music at Old Possum Brewery.

He describes the New Orleans style, which pertains to the sides as much as the barbeque meats. He is from New Orleans and his family comes from North Carolina. There the barbeque has vinegar flavors, while Kansas City style is a thicker tomato based sauce. In his personal style, he looks for a perfect balance between spice, sweetness and citrus acidity in his. They serve traditional New Orleans sides like collard greens, red beans and rice and potato salad.

Old Possum Brewing will showcase Faron’s menu this week and again in August on Friday, Saturday and Monday. They also have music at Old Possum, and all the information is available on their website and social media, especially Instagram, says Sandro.

“I always wanted to create an environment very similar to home. What I mean by that is, under any circumstances, people who don’t have much, we come together and we put together whatever we have and we make it as tasty as possible and we have a good time.”  -Faron Bailey

Faron tells his story about how his wife came from Petaluma but they met in New Orleans and lived in Manhattan before moving back to Sonoma County. He has been cooking all his life and wanted to create something in the community that he was familiar with, which is New Orleans style cooking, because it wasn’t available. Sandro heard about Faron’s New Orleans Style BBQ & Sides and made contact with him. Follow the Old Possum Instagram page for up-to-the-minute news about menus and music at Old Possum Brewery.

They are tasting a blood orange flavored Gose beer that Old Possum makes. There are a lot of blood orange IPAs but Sandro thinks the hops don’t go well with the blood orange. Herlinda asked Sandro to tell about how he uses an over the counter probiotic to make the beer sour. It turns out to cost a lot less than other ways. They are tasting the Alien Search Party IPA from Old Possum. Herlinda tells about judging beers in Europe and hearing from people there that West Coast IPAs are very popular.

All of Old Possum’s food offerings are listed on their IG page. They are open Monday – Friday 11:30 am to 8:30 pm, 2:00-9:00 pm Saturday and closed Sundays. Old Possum just celebrated their fourth anniversary. Sandro grew up in Italy and remembers tying new growth in the vineyard. But he attended UC Davis and studied winemaking and met Charlie Bamforth there, who has been on Brew Ha Ha on this episode. He is a professor at UC Davis who taught Sandro about brewing. Sandro also makes wine for D’Argenzio winery, a small local winery that also has a tasting room in Burbank, California (in the Los Angeles area).