Ed McGrath from Ace Cider and Adam Ray, founder of Beer City are both guests on Brew Ha Ha with Harry Duke and Herlinda Heras. We have had Ed McGrath on Brew Ha Ha most recently on this July 2020 episode.

Brew’s News with Herlinda is sponsored by the Beer City Festival, which was going to be in Calistoga in November this year but instead will be held Easter weekend, April 16th, 2023. Also, Santa Rosa will have a Beer City festival on February 25th, 2023, downtown in Old Courthouse Square.

They begin the show by christening the new KSRO studio with an heirloom cider. It’s a dry cider that tastes a bit different every year. It is 9% ABV, Herlinda calls it “sneaky.”

This is an heirloom cider made from local Gravenstein apples. The French ciders have less alcohol and uses more traditional cider apples. During Prohibition all the American cider apples were chopped down because they’re not for eating. Today there is a west coast style cider, called Blackjack, made from west coast apples. There are also distinctive ciders coming from New York and Michigan. Ace Cider founder Jeffery House has been a guest on Brew Ha Ha before.

They have another cider called Ace High, a card playing reference. It is semi dry and has subtle fruit flavors. Ace doesn’t add food coloring or sugars so the colors are all natural. Blueberry doesn’t give color, so the other berries do.

Beer City is less than a year old. Adam Ray tells about how the idea started in Santa Rosa, about how to create an attraction.

Ed McGrath is happy to have introduced cider to more people than anybody. Cider is gluten free, since there is no grain.

Cider is the perfect pairing for a lot of Thanksgiving foods; not the sugary non-alcoholic kind, but the real fermented cider. Ace has also made a seasonal pumpkin cider (although the pumpkin is nearly flavorless and what we are actually tasting in all of these things is the spices, not the pumpkin). 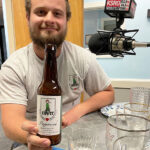 Brew Ha Ha gets a visit from Hendrick Verspecht from cuVer Brewing. He has been on Brew Ha Ha before. Today he brought some beer to the studio. He brought their three Belgians. Pepperwood Saison, a Belgian Saison with meyer lemon peel and bay leaf, and two types of Belgian abbey ales, a golden one and a dark one.