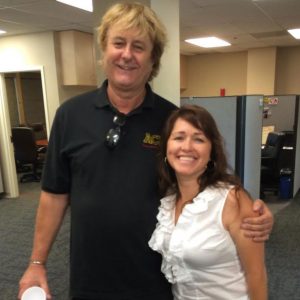 Ace Cider’s brand ambassador Ed McGrath and founder Jeffery House join Steve Jaxon and Herlinda Heras today on the Brew Ha Ha podcast. Ed McGrath says he became a cider ambassador by loving cider. He started drinking cider when there was a beer strike in Canada, many years ago. His family had a little vineyard in St. Helena and he felt more comfortable working with cider than in the wine business. Jeffery House is on his way to the studio and will join the show soon.

In England, cider is a drink for every social class. It is also very popular in Normandy, France, the north-west region. Cider is the number one drink in that region of France and there are many brands and small local productions. This one they are drinking comes from Isigney-sur-Mer, which is reputed to be the town that Walt Disney’s family came from.

Herlinda tells about how the locals would reward the American soldiers with bottles of locally produced cider after the troops landed, in the D-Day Normandy invasion.

Generally the French ciders are lower in alcohol, 4-6 precent, than others.

Next they sample an Ace Cider. Ed McGrath is the brand ambassador for Ace Cider, founded by the House family. Ace Cider is the oldest premiere cider producer in the US. Ace Cider is a Sebastopol company that sells in 48 states of the US.

They have a bottle of Ace Black Jack cider made from Sonoma County Gravensteins. The Gravenstein apple is an heirloom apple that is excellent for cider making. The Gravenstein has enough tannins and tartness to make really good cider. Grocery store apples are bred for thick skins and less bruising, and they don’t have the tartness needed for cider. Apple cider is made from cider apples but when Prohibition came, the trees were destroyed. There is great cider being made now in places like New York and Michigan.

You can rent an apple press from The Beverage People as well as all the production and bottling equipment you need. They also provide information, books, courses and will help you use their equipment. Visit the Beverage People’s website to learn about it all.

[12:48] Jeffery House is in the house! The founder of Ace Cider joins Steve Jaxon, Herlinda Heras and Ed McGrath in the studio.

He has brought a Mango Cider from Ace Cider, their latest line addition. It is being test-marketed in Oregon and in Los Angeles. His Guava cider is the fastest-growing cider brand in the US. He has started canning cider this year, which is selling very well. His keg business has dried up due to Coronavirus closures. The business was deemed essential so he was able to stay open. His sons help run the company, Simon is the national sales manager, in Los Angeles. They led the company to start its canning operation.

Ace Cider started in Marin in 1993 and moved to Sonoma County with they found apples and a producer in Sebastopol, then they thought they could do their own. They started in Graton, It was called Ace in the Hole.  and then he met Warren Dutton, a big apple grower and grape grower. They became partners. Ace Cider is now the 3rd largest cidery in the US.