Herlinda Heras calls from Belgium to talk to Harry Duke about her travels in France and Belgium on Brew Ha Ha today.

Herlinda is calling in live from Halle, Belgium, where it is 2 am. It’s near the capital, Bruxelles. Drie Fontanen brewery is located there, and Pete Slosberg is celebrating his birthday there tomorrow. Pete Slosberg has been on Brew Ha Ha before. He was a ground-breaking brewer and marketer in the 1980s before craft beer was a thing. Pete’s Wicked Ale was an early craft beer from before it was called that. They were known as micro-brewers back then. There are people from all over the world who have gathered there for Pete Slosberg’s birthday party. They had a dinner for 24 people that evening with lots of local craft beers on the menu and a special birthday brew. 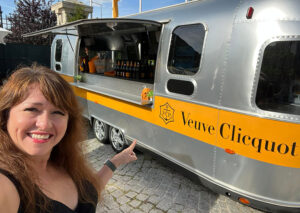 Herlinda also visited Epernay, in France very close to Belgium, which is where Moet & Chandon and Dom Perignon are located. There are lots of little villages to visit and Herlinda endorses their tourism website. It reminds her of Sonoma County but they also have Roman ruins. The oldest champagne winery is from 1584. They also tried the local beer. Their beer styles are light, called blonde and blanche. Herlinda also visited Veuve Cliquot and Pomery.

After Pete Slosberg’s birthday Herlinda has a four-day beer tour in Paris, which has lots of great craft beer bars. Then she goes to Cognac and Bordeaux, to learn about Cognac and brandy. After that she will be a judge at the Iberian Awards in Portugal, the national craft beer competition there. She also describes ratafia de Champagne, which is a mixture of grappa distilled from the pomace left after wine pressing, blended with unfermented grape juice.