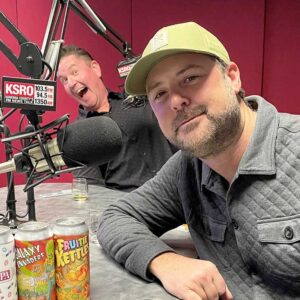 James Claus, co-owner and brewmaster of 3 Disciples Brewing is here, and so is Casey Williams of Barrel Proof Comedy, to join Harry Duke and Herlinda Heras on Brew Ha Ha today.

“Beer is our religion.”

3 Disciples Brewing is located in Santa Rosa (next to the Tipsy Taco). They celebrate their fifth anniversary next year. Matt, Luke and James are the three disciples and their mottos is, “Beer is our religion.”

Sally Tomatoes is still an event center, even if the restaurant is closed. James describes how they turned their location into one of the best music and comedy venues in Sonoma County. They moved brewing operations from Sebastopol to Santa Rosa about a year and a half ago. It is a great space and they are working on getting their operation moved to 1018 Santa Rosa Plaza for the last year. It is the old Two Tread location and came with equipment. As of Jan. 1 they will be moved in entirely. James is very happy with the new venue.

There is big Brews News today, which they describe as two doors opening. As 3 Disciples are leaving the old venue, Casey is taking it over. 501 Mendocino Ave. will now be called Barrel Proof, an entertainment venue for comedy and music. It is also a great location and Casey knows its potential. Barrel Proof will still sell 3 Disciples beer. They also have the Tipsy Taco next door and food trucks that come by. The new 3 Disciples location does have a kitchen. “I can promise you it will be great.” Barrel Proof has a goal of opening by the third week in January.

3 Disciples started in Sebastopol seven years ago. Two years ago they moved into 501 Mendocino but they have outgrown it. Ron Sly does the artwork on the 3 Disciples cans. They have known Ron for a while, he used to be in the same home brew club. When Covid happened, breweries needed to distribute beer in cans, so they needed good art. James new Ron was perfect for that gig. Let There Be Light Pilsner, a German style beer, clean and light, with German hops. It’s only 5% and it’s a Pilsner. 3 Disciples started with three Belgian styles. Since the people like IPAs now, they had to make a lot of that.

They second beer is their new West Coast IPA, 3D IPA. 6.5% with Idaho 7 Centennial and Cascade hops. He gets lemon and pineapple flavors. The Cascade hops give citrus notes and the Centennial gives pineapple flavors. The next one is called Galaxy Invaders, a hazy IPA. It is primarily Galaxy hops from Australia, and the 2022 vintage. The hops are fresh from a month ago, where it’s summer down under. The fourth beer is called Galaxy, Citra and Mosaic and features Galaxy invaders from outer space. Then there is a kettle sour called Fruity Kettles, made with apricot, peach, tangerine, vanilla and milk sugar.