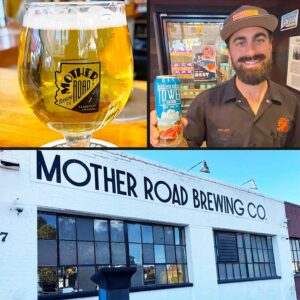 Harry Duke, finishing his interstate tour this week, is calling in from Flagstaff, Arizona with Dylan Prater on the line, who is the manager of Mother Road Brewing Company in Flagstaff. John Steinbeck called Route 66 The Mother Road in The Grapes of Wrath. In November Mother Road Brewing Co. will celebrate their 11th anniversary. Their two core beers are the Tower Station IPA, the number one selling independently owned IPA in the state, and the other is Conserve and Protect Golden Ale. A portion of its proceeds go to the Arizona Game and Fish Dept. The taproom in Flagstaff is also the original brewery, although they also brew beer in another nearby location. Dylan describes their quest to provide “radical hospitality” to make it a place you will want to visit. 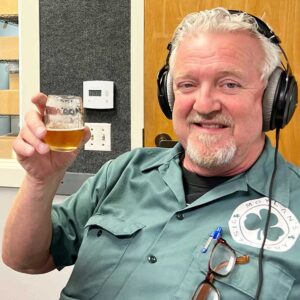 He started the first brewery after attending St. Mary’s College. “I just knew I wasn’t going to be an accountant and I had to have a plan.” He was one of the founders of Marin Brewing Company in 1989 when there were only 25 breweries in California. Today there are thousands. Today he has Moylan’s Brewery. They are located in Novato right off the 101. One of their signature beers is a Scotch Ale. Beers from Scotland will be light on the hops. Moylan’s Distillery opened in 2003/2004. They are located behind the Buckhorn in Petaluma. Their whiskey has won many awards.

Moylan’s is huge inside and has a menu with things like a half-pound hamburger, an epic corned-beef Reuben sandwich, bangers and mash with a lot of mash, fish and chips and all kinds of pizzas and salads. Marin Brewing Co. used to have a lot of beers on tap and Moylan’s also has a lot, they have 12 on tap now. They just installed a 2000-pound mill on the second floor. Marin Brewing Co. had a 32-year run.

Herlinda mentions that Anchor’s Liberty Ale was the first IPA, they just didn’t call it that. Brendan mentions that the youngest beer consumers today are interested in having a constant rotation of new beers. Moylan’s has an active Facebook and Instagram, and they are open 7 days a week until 9pm. They plan to bring back live music next year.