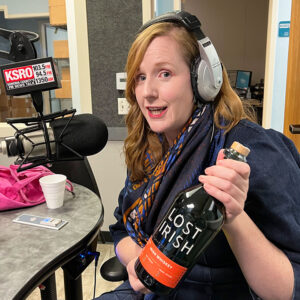 Susan Boyle, the Irish Spirits Ambassador is the guest of Herlinda Heras with Peter Lopez who is sitting in for Harry Duke on Brew Ha Ha today.

First, Harry Duke is calling in from a roadside attraction on Route 66 in Oklahoma, on his road trip. Oklahoma City has a thriving craft beer scene, and he’s “not in the land of IPAs anymore.” If he sees one or two on the board, it’s a surprise. The Pilsners and Lagers are more popular there among the craft brewers. They are going from their Fall beers to their Winter beers.

Bord Bia is the Irish Food Board, that oversees food and drink exports from Ireland. There is a renaissance going on in Irish distilling. After the low point of the 1960s there has been a great revival. Herlinda points out that Bourbon and Whiskey start off with the wort, the same way beer does, only they don’t add hops and they distill it instead of ferment.

Herlinda has brought a bottle of Guinness West Indies Porter. It is a historic recipe, which came from their corporate archives. There is a lot of brewing history in those documents. They have a whiskey called Lost Irish, a blended Irish whiskey. Irish whiskey can be aged in any kind of wood, such as chestnut or acacia, besides oak.

This whiskey has spent time in six different casks which impart a spectrum of flavors. It is drinkable and smooth with caramel, toffee and nuts in the flavors. “Everything tastes better with friends.”