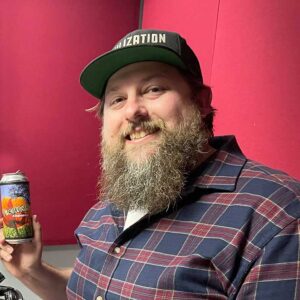 Ron Holt from Civilization Brewing Company is our guest on Brew Ha Ha with Harry Duke and Herlinda Heras.

Olompali Lager is named after the closest state park to their Petaluma brewing facility. They have also brought their signature Pilsner. The brewery is brand new. They just opened their taproom on Oct. 31. They got started as North Bay Brewery Tours. Ron talks about how he got to know a lot of people in the business and gained a lot of knowledge about beer during that time. He got to see inside and outside of a lot of breweries.

The taproom is located at 490 Mendocino Ave. at Ross St, in Santa Rosa, across the street from Three Disciples. “If your grandma’s living room was cool…” is how Ron describes it. There are food purveyors nearby and they sell snacks. They are active on Instagram where their address is @civilizationbrewingcompany. They will have events every week night. Tuesday they will do beer pong, Wednesday old movies and video games for Popcorn night. Industry night is for people who also work in the hospitality industry. Friday they will have themed vintage vinyl LP night.

The name takes its inspiration from the historical theory that organizing the production of grain and beer was a driving force in the development of early civilizations. They were home brewers who just wanted to make really good beer.

The next beer, called Sweet Fire, is flavored with apricot and habanero peppers. The flavor is very subtle and it matches the aroma. They also have Azacca Bold as Love west coast IPA and one called Ego Death, double IPA. That one comes with a Timothy Leary quote. They work with Sandro Tamburin to make the wort then they do their fermentation and packaging in their own location.

The last beer, called Ego Death, is about 8 to 8.5% ABV. This beer comes with a Timothy Leary poem, “O voyager, the time has come for you to seek new levels of reality…” We are all one, so Cheers!