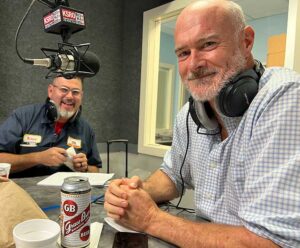 Bear Republic brewer Richard Norgrove and Josh Grace of Grace Bros. Brewing join Herlinda Heras in studio. Peter Lopez is sitting in for Harry Duke who will call in later and Tara Nurin will also call in to talk about the award her book just won. Tara Nurin was a guest on Brew Ha Ha on this episode of October 21, 2021, and talked about her book.

First, Tara Nurin calls in to talk about about her book about women in brewing winning an award. Tara has been on Brew Ha Ha many times including this October 21, 2021 episode where she described the recently published “The Woman’s Place Is In The Brewhouse.” The book has just won the first prize from the North American Guild of Beer Writers. She really likes hearing stories from readers who identify with the many successful women in brewing. It was also a great experience to do the research interviews and meet a lot of her heroes. Tara has some stories coming out on the Food Network website too.

Richard and Josh tell the origin story of the Grace Bros. Beer, which was making beer in the early 1900s. He works in the business of buying and selling wineries, which often includes trademarks. In the course of another business deal, he found the Grace Bros. Beer trademark was available. He describes the process of recovering the trademark, which is on the beer that they are tasting today. Grace Bros. was one of the largest breweries 100 and more years ago, in Sonoma County. They stopped making beer in the 1960s and now they are relaunching the beer with Bear Republic. A portion of the profits go to the historical society and to veteran’s assistance.

Russian River Hop Time Harvest Ale made with 100% Sonoma County hops and barley, and malt from Admiral Malting. They are canning it now at Russian River Brewing Co.

Where the Hell is Harry?

Harry Duke is calling in for an installment of “Where the Hell is Harry?” this time from Flatonia, Texas, which is between San Antonio and Houston. He was at the Alamo earlier and posted pictures on The Drive’s face book page and ended up at the oldest saloon in Texas, The Buckhorn, in San Antonio. When he asked for a local beer he had one called Texican from Blue Star Brewing Co. of San Antonio, a light Mexican style lager, which was perfect for the hot weather there. Harry describes seeking out Classic Rock stations while driving across the southwest. At one point, at night, doing 80 MPH (the speed limit there) Freebird came on… And gas is $2.85 a gallon, but the tradeoff is, you’ve got to be in Texas.

They had a big release party for the new Grace Bros. beer. They sold out in the first day. The beer is a classic, light easy-drinking beer (under 5%), as it was originally. They tried to imitate the ingredients and process and they got to experiment as home brewers in order to get the recipe right. Grace Bros. started brewing in 1897 and apart from Prohibition, it was idle from 1953 to 1958, then again until 1967. But in the heyday of the 1940s, when it was most popular, this was the beer. They were careful to use just the right hops, which is California Cluster. It’s a Bavarian type lager, even if in those days, it was basically just called beer. The pub is in Rhonhert Park on Roberts Lake Road and the beer is on tap. They might release it in Spring or earlier in Summer next year.