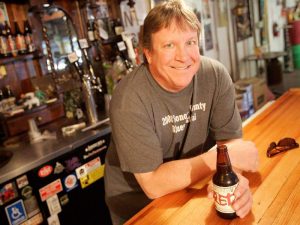 Ron Lindenbusch is back on Brew Ha Ha with Steve Jaxon, Mark Carpenter and Herlinda Heras. He was one of the co-founders of Lagunitas and now he operates Hopland Tap in Hopland, California.

He was with Lagunitas since the beginning, for more than twenty years. Now he operates Hopland Tap. The sign says “Welcome to Hopland. We’ll take care of the rest.” Steve Jaxon’s band used to play at the Hopland Brewery years ago. They used to make Red Tail Ale and they are finally serving it again now.

Hopland Tap’s building was built in 1880, it was called the Hop Vine Saloon. They have been open for two and a half years. They opened just before the pandemic. “I can’t think of a worse time to open a restaurant.” Ron is working on his ventilation system and looks forward to full capacity. There is an outdoor area for about 100 people.

The Beverage People proudly sponsors Brew Ha Ha. They have new products and gift ideas for any occasion. Their teach you how to make, wine, beer, cheese, olives, mead, kombucha, cider, and more. Mark Carpenter says that they, “make making beer easy for you.”

Hopland Tap has a full menu now, including newly added peel-and-eat shrimp and some turkey receipes. He was looking for menu items that are easy to handle. They make burgers with ground chuck and with onions grilled into them, simple is the best way. They will also do some St. Louis style ribs.  Their beers come and go, so there is always something new. They are happy to start playing live music since it’s a good place to do that. They will be starting a blues invitational jam on Wednesdays, starting probably in June. They found an old blue upright piano that they are getting fixed up. They are open noon to 8 Wed. through Sunday. They are located on the 101 in Hopland. They have a Facebook page for news about menus and events.

The first dry hopped ale to be released in America was Anchor’s Liberty Ale, using all Cascade hops. It is a 6.5% alcohol pale ale. By today’s standards it is light but when it first came out, it was considered very hoppy. They will work on getting kegs of it for Hopland Tap.

They are planning a big public event to be called Destination Hopland, a street party, to be held in October.