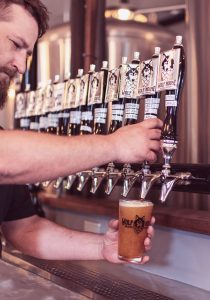 Michelle Marquez is filling in for Steve Jaxon today on the Brew Ha Ha podcast, Herlinda Heras has brought guests from Wolf House Brewing in Cloverdale, Kevin Lovett and Dwayne Moran. Kevin Lovett grew up around craft beer. His father was one of the founders of Mendocino Brewing Co. He and Don Barkley took the equipment from New Albion and started Hopland which became Mendocino.  When Barkley founded Napa Smith, Kevin asked for a job and started on the bottling line. Then Brian Hunt, who also worked at New Albion, gave him a job at Moonlight Brewing Co. After that he was head brewer at Stumptown, and then master brewer at Cloverdale Ale. Now he is running Wolf House with his partner Dwayne. He describes the challenges of opening a brewery and brewpub in these times. They were open for about three weeks before precautions. They are open, though.

They are drinking Burning Daylight Pilsner. It’s 4.6% alcohol. He calls it a Cloverdale Pilsner because he does not treat the water so the local water is what is being used. Most Pilsner makers try to match the pH of the Pilsen River, but he says he thought he could do better.

He still has some New Albion swag. He also uses a recipe from the old Eye of the Hawk, for a beer he calls One Eye Select Ale.