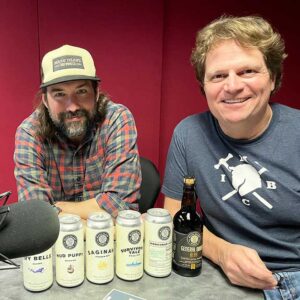 Mare Island Brewing Company co-founders Ryan Gibbons and Kent Fortner join Harry Duke and Herlinda Heras on Brew Ha Ha today. Mare Island was a naval shipyard since the earliest days of California and Herlinda was actually born there, since her father was in the US Navy. It was the oldest naval base west of the Mississippi, and also has the oldest golf course and one of the oldest Tiffany stained glass windows in the west, in its local church. Read about the history of Mare Island here.

Kent and Ryan founded Mare Island Brewing Co. after they met in the wine business. They are both professional wine makers. It is near the city of Vallejo and the city fathers asked him if he could move his winemaking operation there. The topography wasn’t right for that option, but when they met each other again in early 2013, they found the opportunity to open the brewery, on a shoestring.

Mare Island used to support the town of Vallejo, which fell on hard times after the base closure. The city has supported a lot of reinvestment and development of new businesses including the brewery.

With their experience making wine, they wanted their beers to be balanced and to make traditional recipes without chasing trends. They also took the opportunity to place historical information about Mare Island on their labels. It was a center of military production. A long list of important systems was produced there, including submarines and aircraft carriers. The cans also all feature a ship in the design, with a short version of the story of that ship on the label.

Their beers are named after ships. The labels have stories that tell the histories of the ships on the label.