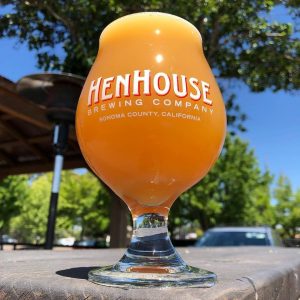 Colin McDonald, brewmaster and co-founder of Hen House Brewing is in the studio with Herlinda Heras and Harry Duke on Brew Ha Ha today. They have Hen House’s special brew Big Chicken to taste. This year Hen House has Big Chicken in cans in the tasting rooms in Petaluma and Santa Rosa, and kegs for all their other bars and restaurants. This is their big celebration beer. Hen House has some distribution in Portland. Their Portland distributor is driving up tomorrow with kegs freshly filled to deliver there. This beer has a following of people who are eager to tap these kegs as soon as they can.

This is their 10th anniversary and 10th batch of Big Chicken. It is everything they learned about making hoppy beer during the year. The recipe changes every year as they learn new stuff. They are also doing some new beers with unique yeasts. They use some genetically modified yeast from Berkeley Labs, UC Berkeley’s yeast lab, which produces custom strains. They bring an enzyme that releases more of the inherent flavors in the beer. There are different types of hops in this year’s recipe, but with a “super tropical fermentation character” on it. Colin calls it “the best batch ever.” It is intense, fun and exciting. Herlinda says it is “extremely drinkable.”

Big Chicken will be available in cans at the tasting rooms until this weekend and may or may not make it into next week. They want people to experience it as super fresh. They were still a nano-brewery when they made the first Big Chicken.

Colin describes the brewing process as imperfect, and tells something he learned from Brian Hunt of Moonlight Brewing, who said that if you don’t have to dump some beer out every year, “your standards just aren’t high enough.”

Brew Ha Ha is sponsored by the Santa Rosa branch of Yoga Six located in Coddingtown Center. YogaSix has special signup promotions special workshops and Beer Yoga, so check out their website or their local studio’s facebook page. Call them at 707 527 6454 or visit their website at yogasix.com/santa-rosa

Hen House is opening in Fairfax. They took over the old Iron Springs location. Alex their chef is focussed on using local ingredients like the abundant locally harvested oysters and they are also making some food-centric beers.

Gail Williams joins calls in to the studio to speak with Herlinda Heras, Harry Duke and Colin, about SF Beer Week. Gail describes how Omicron hit just as all the event programmers were in their important planning stages. Despite the difficulties, they are putting on the show and all the information you need is on that website, SF Beer Week dot org.

If you go to sfbeerweek.org, you can see what activities are available all over the Bay Area, including shipping options for beer delivery from lots of great craft breweries. Colin will be doing a live beer chat about a collaboration they are involved in called Prime 5. Gail describes the great array of events and games located all around the area, which are all listed on the SF Beer week website. “Whatever you want to do, you’ll find something really fun,” says Gail.