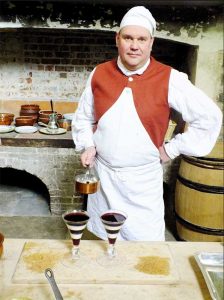 Today’s Brew Ha Ha podcast is an interview with English food historian Marc Meltonville, on the telephone from England, talking with Steve Jaxon and Herlinda Heras. Marc is the consulting food and drink historian for the historic royal palaces in the UK. So he knows a lot about what people were brewing and eating and drinking in different periods of history.

Marc Meltonville jokes that being a Consulting Food Historian doesn’t feel like a real job. He entered the field when he was working in a museum and was approached for a Tudor food project. He mentions that during the 1918 flu pandemic, they did not shut the pubs, even when they closed over venues. The British pub licensing laws close the pubs from 3pm to 6pm and they close again at 10pm.

Herlinda mentions that a lot of our familiar alcoholic beverages actually began as medicinal cures. Marc agrees, that a lot of recipes were in the “physic” i.e. medicine books, not the cooking books.Distillation was reserved for tonics. Around the early 17th century the digestive drink after dinner became popular. Gin and tonic is an example. Marc tells about how king William, who came from Holland,

Hampton Court and Kew Gardens both have extensive kitchen which have been recently explored, discovered and put back into use to demonstrate techniques and recipes from the past. Marc was also recently at Newland Grist Mill in Pennsylvania, outside Philadelphia, where there is a mill that can make its own malt, so they have built a colonial brewery with period equipment. “Two guys with a stick and a bukcket.” He has also worked at Williamsburg and at Mt. Vernon where they produce George Washington whiskey without modern equipment.

He is currently involved in two brewing projects, looking at brewing processes in the 1700s. He also designed an event based on recipes of Stonehenge, 4500 years ago. He used a mass spectrometer to study the residue of old containers to understand how they had been used. He calls it a “backwards recipe” where he reverse engineered the brew based on the residue. Yeast is from fruit skins, grapes in southern Europe or apples in the north, he realized that by mixing barley, cut apples, honey and water, he got a drink, that he calls, “a drinky thing. “He made a “pre-beer beer” like they did 4500 years ago before malting of barley or extraction of yeasts. It tasted like hard cider. Herlinda says it reminds her of braggot, which is a form of mead made with barley malt and honey.

In the past, the luxury of choice was a feature of food for wealthy classes, wherever you look, whether in colonial America or Europe. This was true with regard to food and drink, across the centuries.