Moonlight Brewing co-owners Brian Hunt and Patrick Rue join Harry Duke and Herlinda Heras on Brew Ha Ha today. Brian is the founder of Moonlight Brewing and Patrick Rue is now a co-owner. Patrick is the former owner of “Bruery” in Orange County which he sold. After opening a Moonlight Czech Pils Reality Czech, we hear their stories. Patrick started brewing in 1992 and just kept at it. He started in a barn near the airport then to Graton 10 years later then to Coffey Lane and has been there since then. It’s walking distance for lucky residents of Santa Rosa.

Lagunitas bought 50% of Moonlight, then Heineken bought Lagunitas. Now Moonlight is back local with Patrick Rue. Brian gets to tell the story of looking for just the right partner for a long time. Patrick has been a fan of Moonlight since drinking Death and Taxes in college. He admires that they have a steady identity and do not have to chase trends. Patrick opened a Brewery in Southern California and he ditched law school to operate it then sold it to some investors. He tried his hand at wine, his winery is called Erosion. They also brew beer and they make ice cream too.

Patrick and Brian served together in the California Craft Brewers Association which is how they got to know each other. Brian had a great reputation that inspired Patrick. For a lot of people, including Harry and Patrick, Death and Taxes was popular when they were students.

The Importance of Death and Taxes

Death and Taxes is Moonlight Brewing’s signature brew. Brian was working for a brewery in Napa and he thought of a beer that he wanted which didn’t exist. Today we are used to a lot of choices but back then, he had to make it. It’s something that works well in hot weather. It is the epitome of the San Francisco style black lager. He made up that term, because his friends in Europe are used to naming beer styles after cities. Even if that’s not a habit in America, it makes sense to him. It is designed for when it’s 90 degress outside. “To me a hop is an accent, it’s not a reason to exist…” 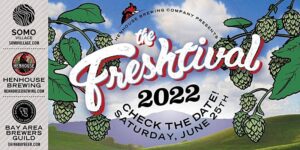 Get tickets for the Freshtival 2022 on eventbrite dot com.

The Freshtival is back on June 25, 2022, at Sonoma Mountain Village. Come for 160 different beers from over 80 breweries from Portland to San Diego. All of the beer poured in this event will be less than 7 days old. For details visit Hen house brewing dot com slash freshtival and visit Eventbrite dot com for Freshtival tickets.

Patrick explains how he likes to try to bring unusual flavors into beer, which is unlike what Moonlight does. He likes to use ingredients, yeast strains and spices that don’t usually appear in beer. They have plans to let some Moonlight beer mature in oak barrels for 6 to 12 months. Reality Czech is a style from Pilsen, in western Czechia. They also have Dim Lights, a gently smoked lager. It took some trial and error to get the perfect smoked malts. Patrick’s brand Erosion wine takes some Muscat Canelli (a cool climate aromatic wine) and flavors it with hops, three different ways.