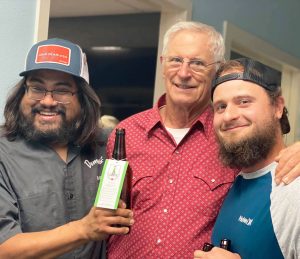 Building and opening the brewery has been a long process. Hendrick tells how his family moved here from Belgium in 2012. His father was used to drinking local craft Belgian beers and he wanted the same beers in California, so he started home brewing. The brewery is located at 7704 Bell Road in Windsor, near Tilted Shed and Barley and Vine (in the former St. Florian location) in the Windsor beverage district. They have a tap room coming on line, the grand opening is Oct. 2.

Hendrick studied Plant Biotechnology at the University of Ghent in Belgium at the university, after attending high school at Montgomery High School in Santa Rosa.

Herlinda has brought a beer from a monastery in Belgium and Nico and Hendrick have brought the entire cuVer lineup, for tasting. The first is Hoppy Don, an IPA. They are using Belgian yeasts to produce an IPA that is not overly hoppy. They brew with a hop extract with is a very efficient way to use hops for small breweries, because their flavor remains fresh longer at the brewery.

Visit our sponsor The Beverage People / Fermenter’s Warehouse for everything you would ever need to make beer and all kinds of other fermented foods and drinks.

Nico Silva is the lead brewer at Cuver. He did the Culinary and Baking program at Santa Rosa JC. The CuVer beers in studio are the Dobbel, the Tripel and the Pepperwood, their Signature Saison Ale. It uses Meyer lemon peel and California Bay Laurel. They also have the Bell Road Pilsner, one of Nico’s recipes, and the first beer they brewed. Their first batch was made in May this year while Hendrick was still in Belgium finishing his university work. They had to keep in touch despite 9 hours of time difference. For Nico, as a brewer, it is important to know how to make different styles of beer, so he practiced with many different recipes other than IPA. As they taste the Tripel, Mark Carpenter says he can hardly taste the alcohol, even if it’s 8.2%. The yeast and malt profile covers the alcohol, as Nico says.

Russian River Brewing Co. is open in Santa Rosa on 4th St. and at their big Windsor location. Click the image to visit their website for up-to-date hours, menus, beers and more.

Currently they only have draft beer, at the brewery and in certan taprooms around the county. You can get a growler or a howler, a little dumbell of beer. He wanted to make the Tripel because he needed a good smooth Belgian style beer in his brewery.