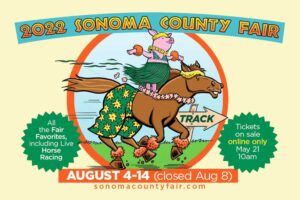 Isn’t this illustration one of the coolest pieces of commercial art ever drawn?

Jeffery was on Brew Ha Ha two years ago on this episode of July 9, 2020 along with his partner Ed McGrath. He was the first to bring British style cider to California. Before that he was importing British beers. He sold to Vintage Wine Estates of Santa Rosa. They have also bought another facility in Ohio where they will be making cider. They have installed a high-speed canning line which allows them to do 4000 cases of cans per day.

The Nor-Cal Brew Fest is back this year and so is the Gravenstein Apple Fair. Ace Cider is approaching its 30th anniversary with a special bottling in champagne bottles. They have just added 15,000 square feet and their facility is now 60,000 square feet and are opening tasting rooms in key locations including San Luis Obispo.

They are tasting the Ace High, an 8.4%, and there is a pumpkin spicy cider that will be in supermarkets. There is another called Space that is named after his wife who had a cameo role in Star Wars.

The Festival starts at 5:30 at the Fair. This is the first year that the Fair is fully back. Attendance is up, all the food vendors are back (except for the Pasta King). There are corn dogs, too. They have monster trucks Friday, and an Eagles cover band called the Illegals. The Beer Fest is open during the rest of the Fair so you can come and go. There is a special ride share location for everyone’s convenience. Becky talks about the Sonoma County Fair having been off since 2019 due to Covid.

Dane Volek, Assistant Brewmaster at Anchor Brewing in San Francisco, calls in. They are celebrating Steam Week August 14-23, 2022. They have a new tasting room now. Steam Beer is San Francisco’s signature beer. They are also brewing several other special beers for the celebration.