Eric and Austin, brewmaster and assistant brewmaster, of No Quarter Brewing, visit Steve Jaxon and Herlinda Heras today on Brew Ha Ha. Harry Duke is also in. This weekend they will celebrate their second anniversary. They had been open for about nine months before the pandemic hit. 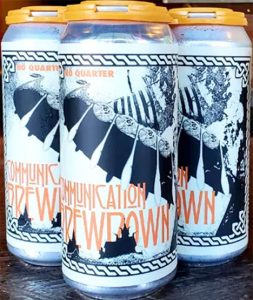 Communication Brewdown from No Quarter Brewing.

Eric explains that they wanted to involve a Led Zeppelin song somehow, and they settled on this. The term “no quarter” means no mercy, or no consideration. They also enjoy Viking lore and there will be Vikings at the celebration. There is a group called the Vikings of Bjornsted, dressed in horned hats and full regalia.

Eric was a home brewer for many years before he decided to turn professional. He buys equipment in bulk now but he relied on The Beverage People for most of his grain, yeast and supplies.

Austin describes a beer called “Communication Brewdown” that they made when they had extra stock of certain hops. Harry Duke says it’s a very smooth drink, Herlinda says it’s malty and smooth. They also taste Houses of the Hoppy, which is lighter, crisper and hoppier than the other. This beer uses Citra, Mosaic and Amarillo hops. Sometimes they start with the name and then make a beer around it, other times they will make a beer and name it after they taste it. They also do a Black IPA which is full of rye, they make an American Stout, a Blonde, and others.

The Vikings came in at their first Halloween party. They were all seated at a table, all dressed up. And now, the leader of the pack is in charge of their web page. “There’s no Viking food, just the best tri-tip you’re ever going to taste,” says Eric. They also have savory pies and journeyman sausages.