Fal Allen from Anderson Valley Brewing Company is back on Brew Ha Ha with Steve Jaxon and Herlinda Heras. Kevin McGhee, President and CEO of the brewery, is also in. Brew Ha Ha is brought to you by Russian River Brewing Co. and The Beverage People / Fermenter’s Warehouse. Fal Allen started with a brewpup in a town of 500 people but they have grown into a brew park on 28 acres with a production brewery. They took the time during the pandemic to actually hire people and do some development work. Kevin tells about how his family bought into the business in January of 2019, just before the pandemic hit. They decided they would not do any layoffs or furloughs and no salaries or benefits were cut. They even added a few people to their staff. 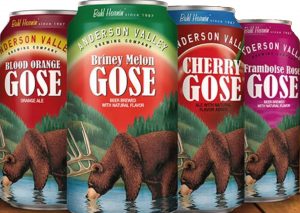 Kevin was a gang prosecutor in San Mateo County, then worked in a law firm, then worked for Jess Jackson, who helped him go to Stanford Business School. He also opened a brewery in his garage, Healdsburg Beer Company.

The Beverage People have partnered with Anderson Valley Brewing to provide ingredients and tools to make their Gose beer. Kevin used their services when he was starting his early home brewing operation.

Anderson Valley Brewing Co. has expanded their license to their tasting room to the fence line of their property, so the entire property is actually available now. It is dog and family friendly and they put in a large sodded lawn. They launched some unusual flavors like a hazy sour ale with passion fruit, guava and coriander, which is their #2 nationwide seller, behind their #1 Boont Amber Ale. There is a salted caramel porter.

Fal Allen has written two books about beer, one is about Barley Wine and another about Gose, an old German style.

Russian River Brewing Co. is open in Windsor and Santa Rosa, check their website for the exact up-to-date hours, beers and menus, or call 707 545 BEER.

They also taste the Healdsburg porter. Kevin started this beer in his garage, then scaled it up for production. The best place to get information on the beer park would be on the Anderson Valley Brewing face book page.

While they are gearing up to expand, with a massive pergola and a pizza oven, Hop Monk’s food truck will be there starting tomorrow, Friday, Saturday and Sunday for the foreseeable future. Also, Bill De Carli from Hop Monk is helping them book music now, too. They also have just started hosting the local farmers’ market on Fridays, from 3-7pm.