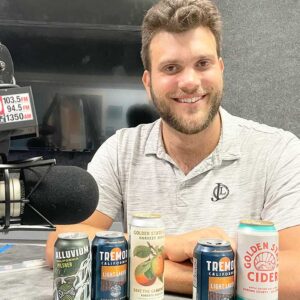 Golden State Cider’s new owner and Seismic Brewery founder Christopher Jackson is back on Brew Ha Ha with Harry Duke and Herlinda Heras. He was last on Brew Ha Ha on this episode that aired back on July 2, 2019, the day before they opened the Sebastopol taproom.

They are tasting some cider called Save the Gravenstein, which Chris calls an expression of Sonoma County Gravenstein apples. He has known the partners of Golden State for a long time. He would like to take Golden State Cider national, that is the goal. Some of their apples already come from the Pacific Northwest but they could source apples from places like Saratoga, NY too.

Sustainability for the Long Term

He explains that brands like Seismic and Golden State could be managed for exploitation but he has other ideas. We hear about their desire to run a sustainable operation for the long term, and how they practice water conservation and use green electricity. It is also important to use local ingredients. Their grain and hops are grown within 10 miles of their Sebastopol facility and they use malt from Admiral Malting in Alameda.

Tremor has won two important Gold Medals recently, at the Great American Beer Festival and the World Beer Cup. Next up is the US Open Beer Championship. One more win and they can claim the Triple Crown for beer. Tremor’s idea was to bring the American Lager back into the craft brew business, but to make it organically and use only barley, instead of the way of “macro” beers.

Seismic Brewing Co. has always had sustainability at the heart of its operations. Climate change is an issue for anyone working in agriculture. In order for his sons to be able to participate in the business years from now, the operation has to be sustainable  with mitigating climate change at the core of their ethic.