Jim Woods, founder of Woods Brewing Company is our guest today. Michelle Marques is sitting in for Steve Jaxon, with Herlinda Heras and Mark Carpenter. They will talk about Woods Beer & Wine Co. and also about SF Beer Week. Jim is a friend of Mark’s daughter, they went to school together in San Diego.

Years ago, Jim asked Mark about making beer with Yerba Mate and Mark admits he didn’t think it would have success. Woods Brewing makes several kinds of unusual beers which do not follow the traditional beer ingredients. Using processes and ingredients like grapefruit zest and bourbon barrel aging, brings people in to tasting craft beer. “We try to take a unique approach to everything we do,” says Jim Woods. Jim talks about making a mess at home when he first tried to make beer at home, while he was a high-school student. His mom covered for him and helped him clean up, but his dad discovered it. He was upset at first, but Jim just asked him to taste it, which he did, and then he let him continue. 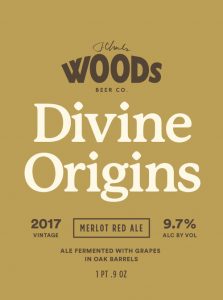 From home brewing to commercial production.

Jim believes that home brewing is the life-blood of the craft brewing movement. His first commercial idea was to make a Yerba Mate beer. Eventually they opened a production brewery on Treasure Island, which is open on Saturdays. They have five locations as Woods Beer & Wine. Jim Woods is also on the board of the California Craft Brewers Association. They add the Yerba Mate to the mash, in the brewing process.

A new law in California allows for more co-mingling of beer, wine and distilling, where they can have production and storage in the same location now. With real estate at a premium, it’s good to be able to concentrate product lines in a single location.

They make wines with “natural winemaking” organic principles. When their wine is 80-90% done, they combine beer and wine in the production of Divine Origins ales. The wine has wild yeast, which is not one of the two types of yeast usually in beer. But some Belgian brewers embraced the wild yeasts, including a lot of the lambic breweries. Michelle says it is complex, with little sour notes, and very refreshing. Mark Carpenter tells about how Anchor wanted recognition for beers other than Steam Beer, so their first variety was a Porter. They did a few German styles but not many Belgians.

Next they taste another “eno-beer” wine-beer hybrid from the Divine Origins line. But that’s not the most unusual beverage they make; there is also a line of beer flavors inspired by Girl Scout Cookies, that they make once a year.

There are also concurrent events in Sonoma County and Woods Wine & Beer Co. is participating, also at their locations. People travel from all over the country to taste the amazing variety of beer available in the Bay Area. Mark Carpenter says, this golden age of brewing. American brewers used to travel the world to learn brewing, now the rest of the world comes to us.