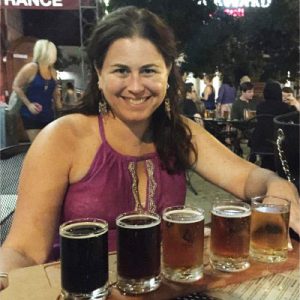 Tara Nurin, author of A Woman’s Place Is In The Brewhouse, joins Herlinda Heras and Harry Duke on Brew Ha Ha today. Mark Carpenter is away this week and Harry Duke is sitting in for Steve Jaxon. Tara Nurin is the Forbes magazine beer and spirits business writer. She has been working on this book for four years and she is finally on book tour!

She has a book signing event at Russian River Brewing Co. on December 16, 2021. Herlinda suggests she could do a special label beer for the occasion.  Tara describes the book, the first to document the rich history of women in brewing. The book looks at economic, political and religious factors and there are interviews with all the prominent women in the brewing business over the last several decades, such as Natalie Cilurzo, CEO of Russian River Brewing Co.

Most people do not know the whole story about the first new ground-up craft brewery in the US after Prohibition, founded in 1976 in the town of Sonoma, called New Albion. There were two women who worked with the founder Jack McAuliffe, and they did the funding and the accounting. They were hard to get for interviews but Tara met one of them, Susie, and features her story in the book.

Tara Nurin will be at Russian River Brewing Co. on December 16, for a book signing of “A Woman’s Place Is In The Brewhouse: A forgotten history of alewives, brewsters, witches and CEOs.”

Visit our sponsor The Beverage People / Fermenter’s Warehouse for everything you would ever need to make beer and all kinds of other fermented foods and drinks, at home.