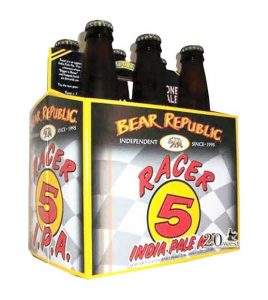 Rich “Ricardo” Norgrove Jr., CEO and Founding Brewmaster, Peter Kruger, COO and Jeremy Grenert, the Marketing Director are here from Bear Republic Brewing Company. Rich and his father started Bear Republic 25 years ago in Rohnert Park. Now his father is retiring and Rich will become the CEO. Rich loves customization and thinks of his role as CEO as facilitating that energy among his staff, who can do the job “better than me now.” They call their Rohnert Park taproom Bear Republic Lakeside and it is near Sonoma State University. Herlinda asks Rich what they have learned from the students there. Rich says that freshness and quality are important.

Rich met Mark before he got into beer. He was working at a mountain bike manufacturer and Mark came in to ask if they could make some motorcycle parts. Mark’s card said, “Brewmaster, Anchor” and he asked Mark about getting into the business. Mark has been a mentor to Rich ever since.

Jeremy Grenert oversees marketing for the brewery. They prefer that the beer do the talking but they know that they have deep roots in Sonoma County and they enjoy keeping up strong relationships. The largest change, he says, is how beer is getting to the consumer. There is more pouring and serving with self-distribution, instead of just shipping cans and bottles. The growth of craft brewing has created competition which feeds innovation. For example, they are tasting a cucumber Göse beer.  Rich explains how it is brewed, without using too much cucumber or salt. They do strain out the seeds.

Racer 5 IPA is their biggest seller that represents west coast style. It has won many awards. It’s always one of the top two or three west coast IPAs. They export to several countries and Japan is one of their largest export markets. They do special labels, for example for the UK. Their license was in the first 500 breweries and there are now 6500 or 7000 of them. The industry is that young and they just happened to come along early.

Rich says that one of their most important jobs is the buying of hops. Two or three times a year in the Fall they have to go to Yakima, Washington to test the hops and get their supplies. They use about 500 acres of hops every year for Racer 5 so it is a “fun challenge” to keep the product consistent and high quality.  Mark Carpenter describes a process he used to test the flavor of hops, by putting some fresh hops into a glass of a light beer, to let it steep, then he could taste the hops in the beer. It’s another way of tasting them, other than rubbing them in your hands to heat them up and warm them.