Our guests on Brew Ha Ha this week talk about how the people of Sonoma County have rallied to help each other through the fires and their aftermath. Please consider making a donation to the Red Cross which has done so much to help Sonoma County again this year. 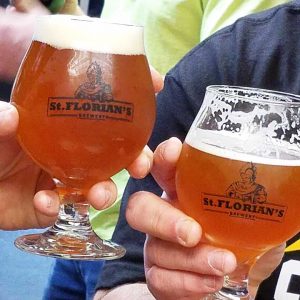 The Levins founded the brewery about seven years ago and they have always donated 5% of their profits to fire-related and community-based organizations.

There are a lot of news crews in the area covering the fires and many of them are hanging out at Russian River Brewing in Windsor. Once the evacuations were lifted, they needed a day to clean up the place. This has been a rough week in Sonoma County.

The first beer they make after they get back up and running will be a special edition of Sonoma Pride beer. They won’t be licensing it as they did in 2017. This beer will be bottled and available at their two breweries. From that they will make a large donation to a charity that Amy and Aron will help them choose. Amy expresses gratitude for the family of first responders. There is some damage to St. Florian’s Brewery and Amy has been working on it herself, since her husband Aron is still busy fighting fires, so Natalie offers some workers from her brewery to help Amy’s. Russian River has a generator so they had their own power and did not lose any beer.