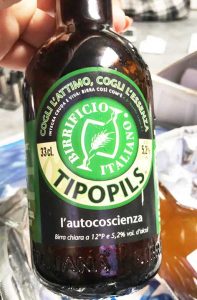 Rio Nido Roadhouse and Crooked Goat Brewing are our guests on this “Flood Recovery Edition” of Brew Ha Ha with Steve Jaxon and Mark Carpenter. Herlinda Heras has invited guests from these two establishments to describe the challenges they are facing since the recent rains and floods.

Herlinda Heras is back from her travels but she’s getting ready to leave again. She was just in Italy to judge the Italian national Beer of the Year competition. Then she went to Malta to visit some friends in their vacation home there. The entire nation of Malta is a Unesco World Heritage site. While she was in Malta they had the strongest storm in a century, so strong that there were fish washing up on shore.

Herlinda brought back a special bottle of beer from Italy, from Birrificio Italiano, and also a Maltese beer.

Today’s guests are Rina and Brad Metzger, owners of Rio Nido Roadhouse in Rio Nido, and Rich Jeter and Carly Church from Crooked Goat Brewing in Sebastopol. Both of their places were damaged in the floods. Crooked Goat is located in the Barlow, a shopping center in Sebastopol, in Sonoma County. They had about four and a half feet of water. They are cleaning up now and hope to reopen in about two months. Grav South held a fundraiser for their staff and they also have a Go Fund Me page “CGB Employees” to help their staff while they are closed. Rich Jeter is Assistant Brewmaster which he admits is a big job for someone who is relatively new to brewing. 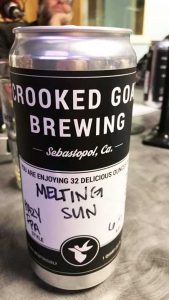 Rina tells how Brad started Rio Nido Roadhouse ten years ago. They watched it being flooded. There is a swimming pool there under normal circumstances. They took on six and a half feet of water in the bar.

Mark tells about the hazy IPA style. In the old days he was making Liberty Ale at Anchor Brewing and it was a lot of work to keep the beer from becoming hazy.

But today, hazy beer is popular.

Herlinda will bring her Maltese beer back after her trip to Puerto Rico. She leaves Sunday and will call in from Puerto Rico for next week’s show. She will be back in a couple of weeks.