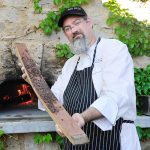 On today’s show, Home Brew Chef Sean Paxton is back on Brew Ha Ha, to talk about cooking with beer, with Steve Jaxon, Mark Carpenter and Herlinda Heras. (Sean Paxton was last on Brew Ha Ha in June of 2017 and that episode is in the podcast for April 5, 2018.)

At first, Steve is tasting a Bloody Mary that Sean has made, with beer. This one is using a beer from Anderson Valley made by Fal Allen. He uses Early Girl tomatoes that are locally grown, and about 9 or 10 different peppers. One of them is the Carolina Reaper, the hottest pepper in the world. It is 4 or 5 times hotter than a Habañero pepper. Sean  Paxton designed this Bloody Mary to go with his hot sauce, a Nor-Cal Mole. His hot sauce brand is Eat Beer Hot Sauces.

Sean and Mark both agree that Thanksgiving is their favorite holiday. Steve always says he has a can of Spam and a pickle for Thanksgiving. Sean goes to Bend, Oregon, to be with his family.

Herlinda Heras asks Sean about his various projects that include the hot sauces, a turkey recipe that is popular on Google, his pumpkin pie recipe made with Old Foghorn Barleywine, which is featured on the Anchor website. He has also just made a feature film named Beers of Joy. Gravitas Ventures is distributing it and their final cut should be ready soon. It will be released in 50 languages in 90 countries for a 90 day theatrical release.

Mark and Herlinda mention that Wilibees has the Brut IPA beer that will be featured on next week’s show.

Sean Paxton started cooking 25 years ago and was attracted to beer as an ingredient. He read a lot of books about brewing and he invited friends to taste his beer. He had extra beer and started cooking with it. Today, his website is an online cookbook, with scalable recipes and they are global, too, so they are easily converted from Metric to American/English measurement units. He has a lot of Thanksgiving recipes, including 12 different turkey recipes.

Sean’s newest hot sauce is actually rather mild. He won a second place award for a sauce with yellow Thai peppers with fresh tomatoes, which can have coconut milk added to make a curry or served alone.