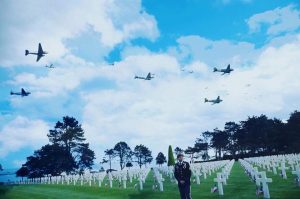 Herlinda Heras’ picture of the flyover at the American Cemetery, June 6, 2019.

Herlinda calls in from Normandy, France, where she is attending the ceremony for the 75th anniversary of the D-Day invasion. She is a few miles from Omaha Beach where the troops landed on June 6, 1944. She attended the memorial ceremony at the American Cemetery. Herlinda will be back next week with some Cider and Calvados from Normandy and some French wine for Steve.

Sarah-Jane Wiseman, Michelle Novacel from Lagunitas and Adriana D’Aubuisson from the Sonoma County Public Library are here to tell about Books and Brews, an event to raise money for the Sonoma Public Library that is happening this Saturday June 8 from 7-9 pm at the Central Library in Santa Rosa. Adriana works for the non-profit foundation that raises funds to support the libraries in the county. This is the first Books and Brews event which they plan to make into an annual event.

The Community Giving Department of Lagunitas has been working with thousands of non-profits in the community for a long time. Sarah-Jane has been a “beer fairy” for the eight years she has worked for Lagunitas. 60% of their donations go to non-profits inside Sonoma county. Last year they donated to 6500 events. They try to donate in every state where they legally can. They have an easy application on their website for non-profits to ask for help with their events.

This event will also include other breweries, not just Lagunitas. The other partners are also local, like Bear Republic, Henhouse, Russian River, Golden State ciders, in addition to non-alcoholic beverages.

Adriana tells about the 3D printer and the piano that they have available there. The library also has a lot of programs to promote literacy and reading.

Mark comments on the Lagunitas Summer Lager, a clean crisp beer. He also likes Lagunitas Daytime, which is only 4% alcohol, so it’s light that way but has a lot of flavor.