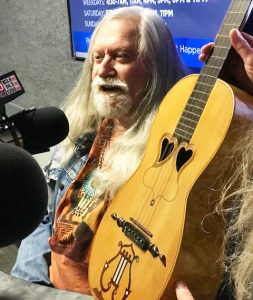 Norman Greenbaum and his portuguese guitar.

Norman Greenbaum is our guest on Brew Ha Ha today, joining Steve Jaxon, Mark Carpenter and Herlinda Heras. Norman wrote and performed the iconic 1969 song “Spirit in the Sky.” Herlinda Heras is back from her trip to Portugal and has brought three Portuguese beers to taste.

Norman Greenbaum is a longtime Sonoma County resident. Steve asks Norman if he is still surprised at the success of his song. It has been in movies and commercials and continues to have its own life. Any band or singer wants to have a hit record, and he was lucky to have a hit on the charts. He says he may have been a one-hit wonder but it has been in over 60 movies and a couple dozen commercials. It was in an ad for Audi in the last Super Bowl.

Spirit in the Sky was in the Budweiser Discovery Reserve American Red Lager beer advertisement. The beer was brewed to commemorate the 1969 moon landing. The song was recorded in San Francisco.

Herlinda asks Norman to tell the story of the song and he remembers various scenes and themes from old Western films. The Stovall Sisters were his backup singers, they were from Oakland where they also sang in church. Mark Carpenter remembers the environment of the late 1960s and remembers the song as a really big hit.

Herlinda Heras has brought beers from Portugal, including an “APA” which they call an American Pale Ale. Praxis Brewery is in Coimbra which is famous for having really good water. The Praxis family younger generation has revived the brewery and Mark says it’s a great example of Europeans doing an American style. It is 6% alcohol which is reasonable. There is also an 8/5% double Bock from Vaida Brewery outside of Aveiro which is south of Porto. Herlinda has also brought a beer with a woman on the label.

Norman Greenbaum remembers that New York was a center of music recording but he was not fond of the city. He had heard that Hollywood was the other center of that business so he went to LA and started Dr. West’s Medicine Show and Junk Band and got signed immediately. The Eggplant that Ate Chicago was their first hit.

Now his songs have been in countless commercials and movies. Norman does say he is flabbergasted and thanks “the Spirit in the Sky for taking such good care of me.” He never gets tired of hearing it even if he wrote it. It still sends shivers up his spine.

Norman has brought a special guitar today which is from Portugal. He bought it at the flea market in Petaluma for $25, 40 years ago and brought it to a luthier for repairs. It disappeared and 42 years later, the guy contacted him saying it was fixed!  It is called a Viola de Terra made of birds-eye maple.