Herlinda Heras says we will talk about Gose beers today with Fal Allen who has written a new book called Gose: Brewing an Ancient Beer in Modern Times.

Anderson Valley Brewing Co. cans have the slogan Bahl Hornin’ printed at the top of the can. This is an expression in Boontling, the dialect of Boonville, California. It means “good drinkin’.” Visit this page on the AVBC website for more about Boontling. Here is a video where Fal Allen talks to a Boonville resident who speaks Boontling. 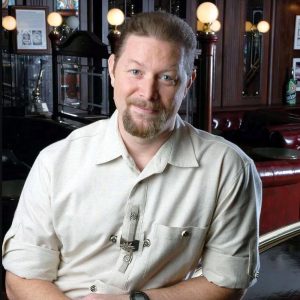 Steve introduces Fal Allen from award-winning Anderson Valley Brewing Company in Boonville, in Mendocino County. Anderson Valley was a hop growing region in the late 1800s. Powdery mildew killed all the plants. The brewery opened in 1988. They opened a brewpub in a town of 500 people and they quickly found that people would come up from San Francisco to buy their beer. It became popular in the mid 90s and they switched from a brewpub to a production brewery.

Mark notes that it was very early in the brewpub business. They did an annual beer festival that attracted more brewers than anywhere else. Herlinda notes that they still do it.

But first she mentions Fal Allen’s new book about Gose beer. The one they are tasting is the Framboise Rose Gose beer. Steve likes it. Herlinda asks Fal Allen to describe Gose beer. It’s one of the oldest styles of beer in the world, from Germany, even before the Rheinheitsgebot. There were a lot of sour beers, like Gose. It’s very light and has a little salt in it and Fal explains why. The beer is named after the town and the river that runs through it, in Goslar.

Herlinda has to leave early today because she’s going to the ELO concert in Oakland at Oracle Arena. After the break, Mark asks Fal Allen about his other books. He and Dick Cantwell wrote a book about Barley Wine several years ago. Sierra Nevada makes one, so does Anderson Valley Brewing. It’s a big strong beer, and hard to make, with the highest alcohol and the most hops. Mark remembers that at Anchor Brewing, they were one of the first Barley Wine makers in the US. Fritz Maytag discovered it while visiting England. It’s called Barley Wine because it is high in alcohol, but only used barley. Fal Allen says they make one every year. They’re aged for a long time and can be rather sweet, with a raisiny, plummy flavor. They’re made in the Fall to be consumed during the Winter.

Next they taste a Gold Gose. Fal found demand for lower alcohol lighter beers. Coors Banquet came out the winner of their taste test. Their Boonville Gold is like a Pilsner but a bit more hoppy, easy drinking. Mark agrees there are two markets, one for low-alcohol lighter beers and another for the hoppy IPAs.

Fal Allen is also a firefighter and Steve asks him about some fires that are burning up in Mendocino County right now (as the show is being recorded). He says they have had four fires just in July, from different causes. It is so dry up there that it takes hardly anything to start a fire. Steve mentions that a lot of California officials are using the term “the new normal” to describe the more dangerous fire conditions that are present in the last several years. Fal Allen mentions that the Santa Rosa fires last year were wind-driven and that once the wind pushes a fire there is no stopping it.

Finally, they taste an Old Fashioned beer, made to taste like the cocktail of that name. It has some cherry and orange peel, aged it in Wild Turkey Bourbon barrels and added Angostura bitters. It’s 8.3% alcohol. Fal Allen is happily surprised with the result. Mark agrees that it’s fun in brewing, to try for a goal and then to achieve it.