Dave McLean and Martin Voigt are back on Brew Ha Ha with Steve Jaxon and Mark Carpenter this week to talk about the Outside Lands festival which will be going on August 9, 10 & 11 in Golden Gate Park, San Francisco. Dave is a partner in Admiral Maltings which produces malt for Bay Area brewers.  Herlinda Heras has judged beer in various competitions with Martin Voigt who was on the show last September. He is a beer blogger from Austria and had extended his California trip to attend the festival. 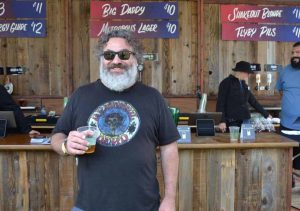 This is the 12th year of the Outside Lands festival and the 8th year of Beerlands. There is no beer competition, it’s just three days of great beer, wine and restaurants doing a “Taste of the Bay Area” showcase. There are 30 breweries in Brewlands, including Anchor. There is Ace Cider and Bear Republic and Lost Coast, Sierra Nevada, Speakeasy and Seismic, among others. There is also Winelands, which has been on every year, with a VIP area.

The Gastromatic Stage may be the most interesting place in the festival, including butchery going on with live music on the same stage. Oxbow Market from Napa is now curating Cheese Lands, too. There will be different kinds of beer. Dave McLean tells how it’s hard for it not to become an IPA festival but there are other varieties there too.

Martin Voigt says that there are good reasons why the American brewers are winning awards for their Pilsner beers, over the German producers.

Mark is tasting an IPA from the Freewheeling Brewing Company in Redwood City, which uses Admiral Malting’s malt.

Dave McLean’s Admiral Malting also has a taproom, in a beautiful old redwood timber building. They have a little restaurant and Herlinda says the food is really good! You can see the malting floor from the dining room. It is located on the old Navy base in Alameda. They serve only beers that use their malt.

Martin Voigt points out the importance of malt in beer. Dave McLean says you build your recipe starting from the malt and you achieve the flavor of the beer on top of that foundation.