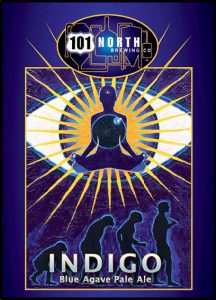 Our guests today are from 101 North Brewing Company, Joel, Jake and JB, one of the partners, all join Steve Jaxon and Mark Carpenter on Brew Ha Ha. Mark Carpenter begins with a taste of their Indigo Pale Ale, then they taste a Dirty Hoppy, a hazy IPA. Mark explains that when Anchor first started making Libery Ale, they had a hard time making it clear. Now, hazy beer has become a thing, breweries are actually courting this haziness. They sometimes add yeast and other grains to produce the haziness. They use pulverized oats and they use New England yeast.

Mark finds that among IPAs, the southern California “San Diego” IPAs tend to be one-dimensional, “…very very hoppy and very thin in the body.” These hazy beers have a little more body to go with the hoppiness. They are looking for a balance between malty and hoppy.

Steve asks his guests to tell the story of 101 North Brewing and they tell how they started in 2007 and moved into their warehouse in 2010. It took them two years to build out their brewery. The partners all had other jobs while they built the brewery on Scott Street in Petaluma, “…about a two iron from Lagunitas.” They are also near Henhouse and some wineries and distilleries.

Mark says that beer drinkers used to be loyal to a brand but not the younger generation of beer fans, because there are so many different beers now. Mark is impressed and considers it a golden age of brewing. “It’s a good time to be a beer drinker,” says JB. 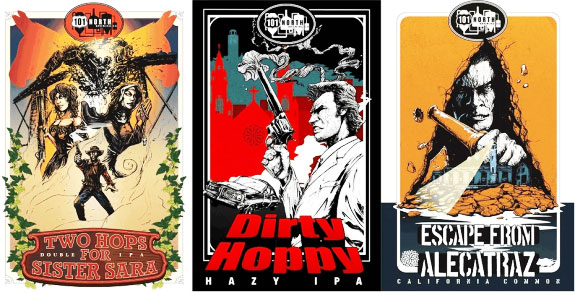 They make four main beers now and some others in the tap room. They named the most popular “Heroine” and Steve asks if they ever had problems with the name, and they haven’t.

They have a promotion coming up at the brewery, called The American Dream Auto Show, a car show, last year they had more than 80 cars. There is also a raffle to win a 1954 Chevy Impala. The raffle includes a blind choice where you pick a bottle, which will have a price between $1 and $300.

They discuss cans versus bottles and now they, like many others, realize that it’s good for the beer and keeps oxygen out of the beer better than bottles. Mark says the hops last longer too.